Youth Olympic Kayaking: Brandon Ooi bows out of round 3 of Canoe Sprint 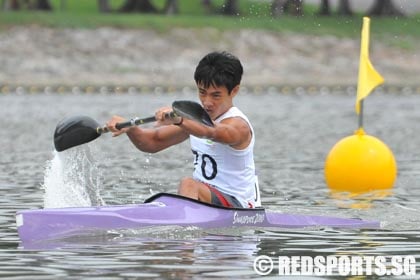 Brandon Ooi is in 14th position with a time if 1 minute 34.59 seconds. He will meet Australian Scott Smith in race 10 of round 1 of the head to head sprint (Photo 1 © Vanessa Lim/Red Sports)

Brandon’s round 1 race against Australia’s Scott Smith was arguably the closest and most thrilling one of the day.

The two paddlers were virtually neck-and-neck for the entire race. However, Smith eventually edged out Brandon by a mere 0.24 seconds in a photo finish, much to the dismay of the vocal home crowd.

Despite this, Brandon’s timing of 1 minute 32.90 seconds proved sufficient, as he still progressed to round 3 by virtue of being the fastest loser in round 1, bypassing the round 2 repechages.

In round 3, Brandon again faced stiff competition. He was up against Igor Kalashnikov of Russia, who was placed a respectable fifth in the Men’s K1 1000m Canoe Sprint Junior European Championships less than three weeks ago. Despite this daunting fact, Brandon still performed commendably, coming in a mere 1.48 seconds behind his Russian counterpart.

Both Brandon and Kalashnikov started the race strongly. In fact, Brandon even appeared to be leading in the middle of the race, but eventually lost out in the last charge down the home stretch.

Even though Brandon failed to advance to the final, his coach Balazs Babella was optimistic about his charge’s future prospects.

“We were not so lucky with the lanes, as we faced a strong headwind (down the home stretch). We also had a tough competitor. However, the fact that he is just a few centimetres behind the top competitors shows that he is really there (among the best). Maybe next time, at the Junior World Championships, Brandon will beat Kalashnikov,” Babella said.

Brandon confessed to having mixed feelings about his experience at the Youth Olympic Games thus far. “I have learnt a lot but I would be much happier if I had won,” he mused.

“As for slalom – I’m not a slalom paddler but I’ve been training hard for the past couple of months. Whatever effort I have put in will come down to this,” he said of his upcoming slalom event on Tuesday.

He is also looking forward and setting his sights on loftier targets. “YOG is just a stepping stone to what I’ve been dreaming of since joining the National Team. I aim to attain a respectable position in the ‘A’ Finals of the upcoming World Junior Championships,” he said. “I will work hard to get revenge on them.” 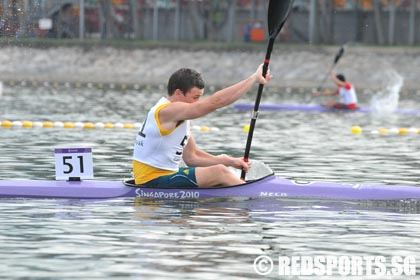 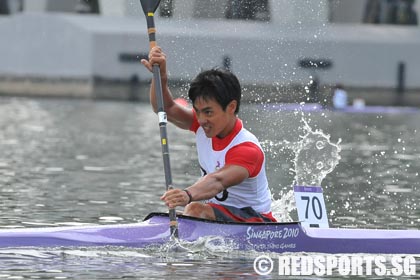 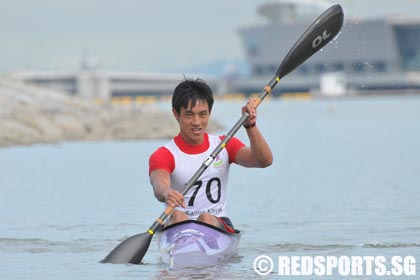 … but he still advanced to the third round to face Russia’s Igor Kalashnikov. (Photo 4 © Vanessa Lim/Red Sports)