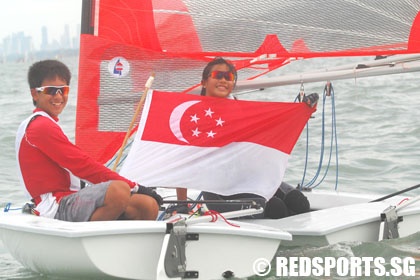 National Sailing Centre, Sunday, July 5, 2009 - The gloomy skies that overlooked the waters off East Coast were certainly not an obstacle for Darren Choy and Najwa Jumali as they scooped up the top spot in their respective groups of the Byte CII category on Day 5 of the Asian Youth Games Sailing competition.

With a final race to go, Darren Choy is assured of a gold medal, while in the Byte CII girls, although Najwa did her utmost to overhaul regatta leader Thanawitwilat Jittiwa in the overall standings with a strong performance today, she can do no better than finish in second place. She is assured of the silver medal, because the Thai holds an unassailable 3-point lead over her.

In the Bio Techno (Windsurfing) category, Singapore's Audrey Yong needs a good performance in the last race as Hong Kong's Man Ka Kei has been pushing her to the limits.

For Chuah Jun Ler, despite the fact that he is out of medal contention, he still has to finish strongly in Singapore's bid to grab the Nation's Trophy.

Here's the story for today's races:

Day 5 of sailing commenced with the Byte CII class as the girls headed out to sea first. Singapore's Najwa had a superb performance yesterday and she carried over her fine form into today's race. She had a huge 10-boat length lead early in the race, but a change of wind conditions caused her to slow down tremendously and this allowed the rest of the fleet to make up ground on her.

Malaysia's Mohd Afendy Khairunneeta, who wanted to erase yesterday’s nightmare of a H1N1 scare which caused her to launch her boat after the rest of the fleet had already did, started strongly and followed closely on Najwa’s trail, but China's Gu Min and Thailand's Thanawitwilat soon caught up with her, and she dropped to fourth position. It was a tough fight between Gu Min and Thanawitwilat, while ahead of them, Najwa managed to break away and took a 7-boat length lead.

With Gu Min finishing just ahead of Thanawitwilat, Najwa was able to close in on the latter in the overall standings, but it was not enough for the Singaporean as Thanawitwilat’s consistent showing throughout her campaign assured her of the gold. Malaysia's Mohd Afendy has a chance at claiming Malaysia’s solitary medal at this Games as she currently trails China's Gu Min by three points for the bronze.

For the boys' Byte CII, Singapore's Darren did not disappoint as he managed to finish strongly towards the end of the race. He capitalised on Pongwichean Supakon's mistake of capsizing in the middle of the course to take the top spot.

Prior to the race, he would need to only finish in fifth position to be assured of the gold medal but he showed genuine sportsmanship and sailed to victory. His next-closest competitor, Thailand's Pongwichean, could only manage to finish third after a close battle with Malaysia's Md Jais Muhamad Amirul Shafiq.

Nonetheless, Pongwichean is guaranteed of a silver medal for Thailand while the third position will be up for grabs as Malaysia's Md Jais Muhamad and Indonesia's Aprinanda Hasbula Simamora are separated by a slim six-point margin.

Audrey Yong placed herself in good stead to extend Singapore's medal tally although she had a bittersweet day at sea. She placed 3rd and 4th in the two races, but after a protest hearing, her 3rd-placing in Race 9 was changed to a disqualification. She is now currently third in the overall standings, with the closest competitor being Hong Kong's Man Ka Kei who is 1 point behind. Both of them are left to battle hard for the final medal up for grabs as Thailand's Kaewduang Ngam Siripon and China's Hao Xiumei have already sealed the top two spots respectively.

Though Singapore's Chuah Jun Ler is out of medal contention, he produced his best showing of the regatta when he pipped Korea's Kim Chaneui for 3rd position in Race 9. However, he finished last in the next race and to add to his woes, he dropped his sail just before he reached the finishing line. Japan's Kuramochi Daiya seized the opportunity to overtake him at the end.

China's Wei Bipeng, who has already exceeded all expectations to land the gold medal, again collected two more bullets as he stood firmly at the top of the standings. If he finishes first again in the final race, he will hold the first 100 per cent win record throughout the regatta. 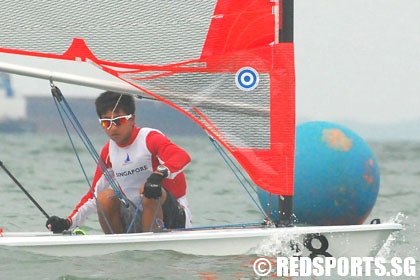 Darren crossing the finish line with a big lead over the rest of the fleet. (Photo 2 © Vanessa Lim/Red Sports) 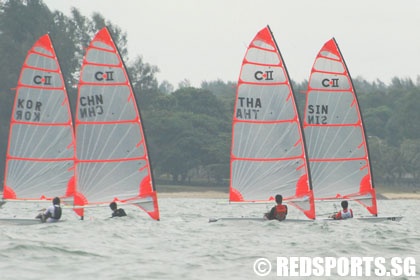 Darren had a slight lead over Thailand’s Supakon Pongwichean at the start, but Supakon took the lead soon after that. (Photo 3 © Vanessa Lim/Red Sports) 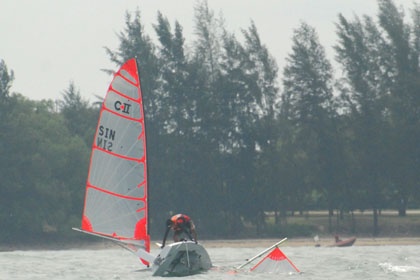 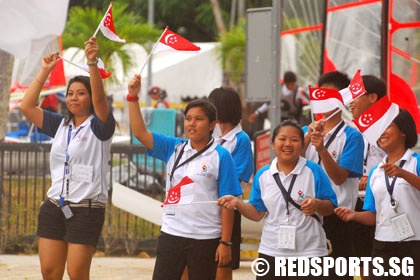 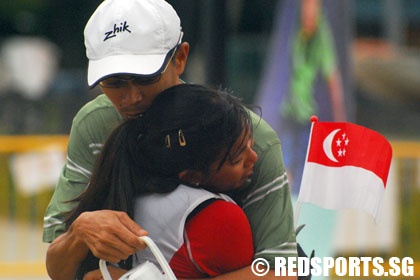