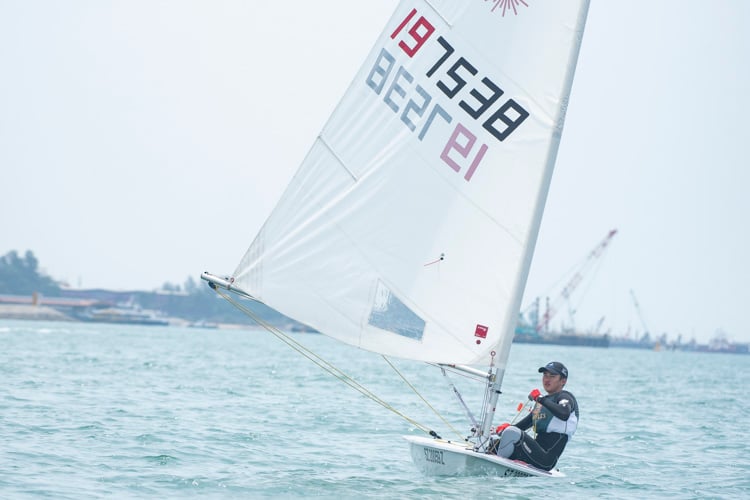 Lu Junrui of Raffles Institution (#197538) came in first with a score of nine points in the A Division Boys’ Sailing Championships. (Photo 1 © Stefanus Ian/Red Sports)

National Sailing Centre, Thursday, April 12, 2018 — It probably came as little surprise when Raffles Institution (RI) once again dominated the National A Division Sailing Championships. After all, they boasted a team that included a good number of sailors from the National Training Squad, as well as a handful of Asian Games contenders.

In the Boys’ Division, their dominance was clear – eight of the top ten sailors hailed from Raffles – and they made a clean sweep of all the individual medals on offer. They eventually emerged as Champions, a feat they had attained for the past seven years. Their lead in points over runners-up Victoria Junior College (VJC) was so big that the Raffles sailors did not even have to compete in the final race to secure the title.

In fact, it seemed as though Victoria had already resigned to their fate prior to the championships.

“Our goal (for Nationals) was to finish second. It was very clear cut because Raffles is always in front,” shared Victoria’s top-performing sailor Tony Chen Zi Ang, who managed a fifth-place finish.

Sailors in both the Boys’ and Girls’ divisions competed in a total of seven races across two days, with their finishing position in each race contributing to their final score for the regatta. Each sailor, however, can exclude one race – their worst-performing one – from their total final score.

The two days of racing saw a variety of wind conditions, from strong, shifty winds on the first day to light and stable winds on the second, and put sailors to the ultimate test.

“The conditions (this year) were perfect. There was decent light winds today and strong winds yesterday – it couldn’t be better. The conditions tested us as all-rounded sailors,” noted RI’s Chin Zong Han after racing concluded on the second day.

The lighter winds on the final day of racing proved to be advantageous to Zong Han, who was able to capitalise on the fact that he was relatively lighter than his competitors, winning two of the three races conducted that day.

His strong showing allowed him to leapfrog teammate Koh Yi Nian to bag the silver, though it was not quite enough to stop Lu Junrui (RI), whose impressive form throughout the seven races put him safely in the lead.

Raffles’ win seemed like an easy one, but the team was not without its equal share of challenges. While they had a good number of national sailors, these sailors were specialised in other classes of boats and were relatively unfamiliar with the Laser – the class of boat the Boys’ Division competed with at Nationals. It also meant that these sailors were unable to train in the Laser as often as the rest of their team did.

Joash Ng (RI), captain of the Raffles team commented, “Our biggest challenge in the lead-up to Nationals was finding the opportunity to train as a team (on the Laser) because a lot of them were competing overseas. For example, some of them returned just before Nationals from their overseas competitions in Spain and Italy.”

Meanwhile, the Girls’ Division saw an unexpected winner as Natalia Mai Do Ngoc of RI, a windsurfer, took home the Gold. Prior to Nationals, she only had a few months to master the Laser and had initially struggled to master the manoeuvres and boat settings that were specific to the boat.

“There were some things I was not used to because this is my first year sailing the Laser. For example, roll tacking (a manoeuvre that allows the boat to change direction with acceleration) was a big challenge for me. Luckily, I had my teammates teach me how to roll tack during training. It also felt weird to have to adjust the many ropes (on the Laser). Getting used to that was a struggle because in windsurfing we only have two ropes to adjust,” explained Natalia.

Her consistent performance over the two days meant that she was able to finish ahead of Singapore’s youngest Asian Games Gold medalist, Jodie Lai of RI, who triumphed in the Girls’ Optimist event at the 2014 Incheon Asian Games. RI’s Amanda Julia Wan Hui Ling rounded up the top three.

Among all the sailors, National Junior College’s Nadine Regina Yeam turned in a particularly courageous and noteworthy performance as she finished fourth in the Girls’ Division.

Being the only sailing representative from her school, she had to compete alongside sailors from much larger school teams. In fact, it has been something she has done for the past six years and Nadine said that the experience can get overwhelming.

“It’s pretty stressful because when you’re out there racing, it seems as though everyone else is from Raffles. There’s a bit of pressure but you’ve just got to push it back and do what you can,” said Nadine.

Nevertheless, she is glad to be able to represent her school at the Sailing Nationals.

Nadine added: “I’m grateful that my teachers have given me the opportunity (to compete) and coming away with a medal is definitely something to be proud of.”