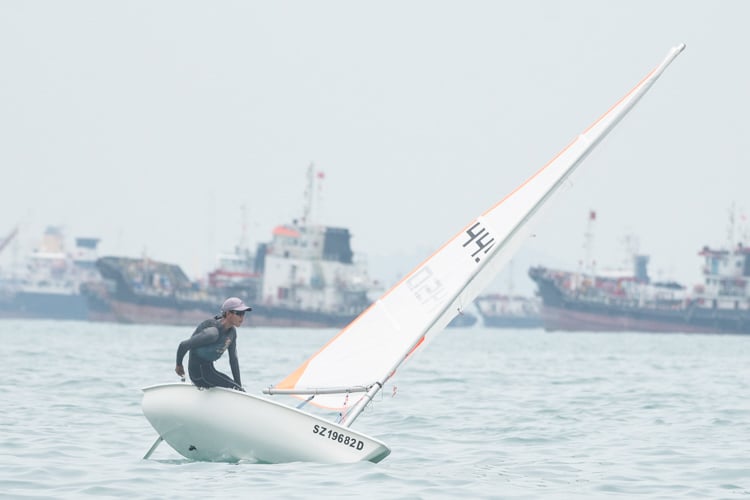 Lee Wonn Kye of Raffles Institution (#4450) came in first with a score of 10 points in the B Division Boys’ Bytes Sailing Championships. (Photo 1 © Stefanus Ian/Red Sports)

National Sailing Centre, Thursday, April 12, 2018 — Raffles Institution (RI) and Nanyang Girls’ High School (NYGH) proved their prowess out at sea yet again, both having defended their Championship title at the National B Division Sailing Championships.

For Raffles, the B Division Boy’s trophy was one they had managed to take home for the past eight years. And there was certainly pressure on the team to make sure they did so for a ninth.

“There was pressure (to win the title) because we are the defending champions, so all eyes were on us. But we couldn’t let the pressure get to our heads, so we just focused on our races and sailed our best,” shared Lee Wonn Kye, captain of the Raffles team.

Each school is allowed to field a maximum of 12 sailors, though only the overall positions of the top three best-performing sailors will contribute to their school’s team score. Under the low-points scoring system adopted at Nationals, the fewer the team points accumulated by a school, the higher their rank.

All sailors competed in a total of seven races with their finishing race positions contributing to their final score for the regatta. Each sailor, however, can excluded their worst race from the final score.

Despite the tricky racing conditions, which saw sailors tested by everything from shifty offshore winds to strong currents, Raffles’ Wonn Kye was able to post consistent race finishes to emerge victorious. Six of his seven-race finishes were in the top three – a feat that went unmatched by anyone else in his division.

Together with teammates Jonathan Lio and Brandon Chia, who individually finished second and third respectively, the trio put Raffles at the top of the table with the lowest-possible team score of 6 points.

Victoria School (VS) took home the Silver with a team score of 15, contributed by sailors Matthias Lin (4th), Daniel Kei (5th) and Lee Hao Zhe (6th). Nonetheless, Victoria’s captain Ethan Yam was proud of how far his team had come.

“(My teammates) have improved a lot since last year. I can really see their determination and perseverance. They’re the ones inspiring me,” noted Ethan.

Anglo-Chinese School (Independent) came in a distant third, having racked up a total of 46 points.

Meanwhile, victory for Nanyang Girls’ High School (NYGH) in the Girls’ Division was not so clear from the beginning. Four races in, they were only leading their closest rivals, Raffles Girls’ School (RGS), by just one point after the first day. And with three races to go on the second, anything could happen.

“They were all very pressured this morning because they wanted to give their best (for the school). So we came together in the morning, and I told them to do their best and the results will fall into place,” said Raffles Girls’ best-performing sailor Riane Lee after the second day of racing.

The regatta never did quite end in their favour, though. Ultimately, it was Nanyang’s third-best sailor, Chloe Chang, who thrived in the lighter wind conditions on the second day, climbing from individual seventh to fourth place, to help her team seal the victory.

Meanwhile, Raffles Girls’ Grace Hing and Maritza Ching, who were initially ranked fourth and sixth respectively, slid to fifth and eight place. Their team concluded the regatta with a total team score of 14 points, a whole six points behind defending champions Nanyang.

For Nanyang, the title was something the team had been working towards over the past two years.

“The team performed very well. Although we didn’t manage to win the C Division title two years ago, we managed to win the B Division title this year and that goes to show how much we’ve been training,” explained Nanyang’s Simone Chen, who topped the Girls’ Division.

In fact, the fight for the individual glory was equally intense too. After all, it was only a single point that separated Simone, a 2017 SEA Games Silver medalist, from Raffles Girls’ Riane Lee.

With four first-place finishes on the first day, Simone’s dominant form made it seem as though she was certain to bag the Gold. However, the light winds on the second day proved to be advantageous for lightweight Riane, as she went on to win the remaining three races.

Alas, she was one race win short of Simone and had to eventually settle for second. Chin Jia Xuan finished in third.

Nevertheless, Riane was pleased with herself.

She said: “I’m quite happy with my performance. I managed to get three first-place finishes, had good starts and sailed the races clean.”