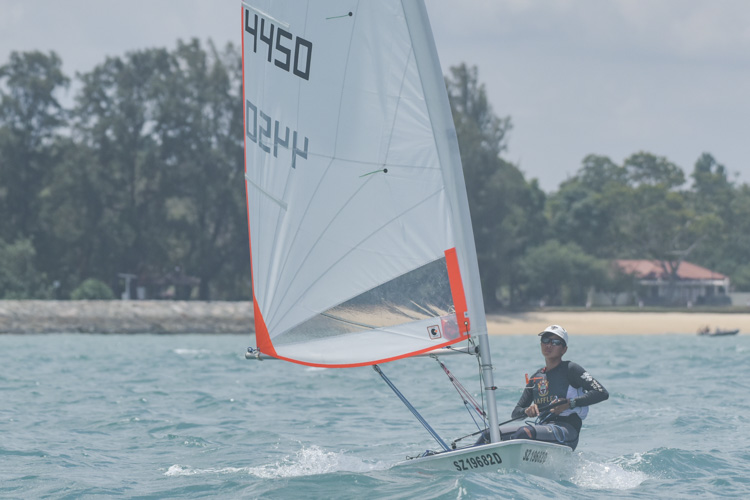 It was the closest Victoria had ever gotten to threatening the reigning champions since school team prizes were awarded for the Byte Division in 2016. For the past two years, they always found themselves with a team score double that of Raffles’.

So when they found themselves within striking distance their closest rivals after the first day of racing, everyone in their school’s sailing community was more than ready to offer their support.

“There was indeed pressure on the team because it has been a while since Victoria emerged as champions. We were motivated to do well and bring glory to our school. Teachers, parents and student supporters were encouraging us and helping us in many different ways,” said Darius Lee, the top-performing sailor from Victoria who finished in second place.

Sailors race individually in a total of seven races over two days and their final score of the regatta is the sum of all their finishing positions, excluding their worst. Schools can field a maximum of 12 sailors, though their team score is determined only by their top three best-performing sailors.

Darius, together with teammates Ryan Sei (5th) and Issac Chow (6th), accumulated a total of 13 points for Victoria. Dylan Ng, who clinched the individual Gold, led the Raffles side that included Lim Khoon Leng (3rd) and Keenan Cheung (8th).

With such a narrow lead, the Raffles boys were no less anxious about defending their title in the final three races.

“It was quite pressurising. Our teacher gave us a pep talk to prepare us for the races and told us not to give up no matter what,” shared Raffles’ Dylan.

Individually, Dylan felt that his performance was not his best and added, “I could have done better because I made quite a lot of silly mistakes. For example, I sailed the wrong course and got penalised (by the jury) twice (during the races).”

Fortunately, his consistent performance, consisting mostly of top three finishes, throughout the regatta meant that those mistakes were not too costly, and he was able to better his fourth-place finish last year.

Jania Ang from Nanyang took the top spot in the Girls’ Division, winning all but one of the seven races. In fact, she was expecting nothing less than a win at Nationals.

“I think the win should be expected (of me) because the better sailors had moved up to the B Division. That’s the only reason I won this time. For me, it wasn’t a particularly competitive fleet,” explained Jania.

While no championship title was awarded for the Girls’ Byte division owing to the small number of participating school teams, teamwork was still a big part of Nationals for TKGS’s Syakirah, given how her school had only fielded two sailors for this division.

“Since it was just the both of us, it was quite hard. They are really strong opponents and I was actually quite worried. We just had to depend on each other. Even though we could have done better, we have shown a lot of teamwork and helped each other,” said Syakirah.