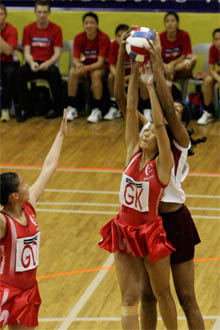 Jean Ng and Melody Teo in action during the 2008 Nations Cup. Both players will feature in the upcoming Asian Championship. (Photo courtesy of Darren Ng)

Singapore, June 11, 2009 – The Singapore national netball team will be competing in the 7th Asian Netball Championships in Kuala Lumpur, Malaysia from 19 to 28 June 2009.

The Singapore National Team enters the quadrennial competition as the defending champions and are placed in pool A, together with Thailand, Maldives and Chinese-Taipei.

The other title contenders – finalists Malaysia and 2001 champions, Sri Lanka – are placed in pool B with Hong Kong, India and Pakistan.

Led by Captain Jean Ng, the team starts their campaign on 20th June against Chinese-Taipei. The latter is a new addition in the competition, having joined the Asian Netball Federation (ANF) in 2006.

Jean Ng, who has captained the team since 2006 said: "It is an honour to lead the team to the Asian Champs. The Asian Champs is a very important competition to us. We are the current Asian Champions and we want to retain the title."

"The win against Malaysia in the 2005 final was a very significant one for me and team, as it was the first time Singapore won the Championships. We all remember the moment and emotions vividly and have worked really hard over the last year. The players new to the team, want to be able to go through the same experience and everyone in the team is committed to the common goal of winning the championships," added Ng.

Ng is the most experienced player in the team with 69 international caps. She has played in two World Championships, a Commonwealth Games and two Asian Championships.

Other than Ng, the other 5 players who featured in the 2005 Asian Champs team were Chen Huifen (Vice-Captain), Li Ling, Lin Qingyi (Vice-Captain), Grace Sim and Tan Huiyan.

Serene Lim is the only change from last year's Nations Cup team. Melody Teo remains the youngest player in the team at the age of 17.

Lisa Beehag, the national coach, who has coached the team since 2008, said” "After the Nations Cup last year, the team had been working hard on evolving our strategies and skills. We have just returned from Scotland where we believe that the tough and physical matches were the perfect head-in to these championships."

"Definitely, our aim, like the other teams, is to win the Championships for Singapore. The team has a strong belief in what our goal is and the way we will achieve this," she added.

The finals of the 7th Asian Netball Championships 2009 will be held on 28th June 2009, 3.00pm at Juara Stadium, Bukit Kiara, Kuala Lumpur, Malaysia. 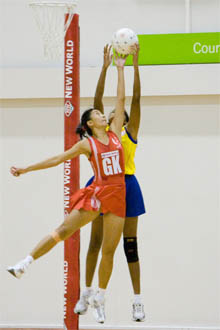 Singapore’s Jean Ng against Malaysia during the WNC 2007. (Photo courtesy of Darren Ng)