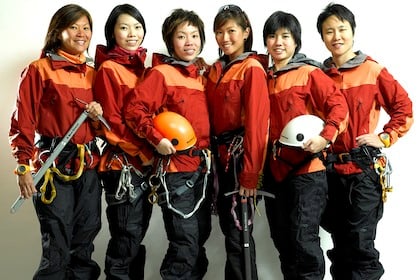 The Singapore Women’s Everest Team are attempting to be the first Singaporean women to summit the world’s highest mountain. The six women came together in 2004 and have since climbed a mountain every year.

Here is their ongoing story live from Mt Everest. 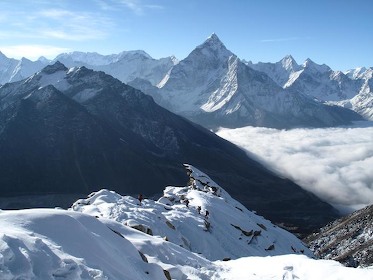 Mt Everest, April 9, 2009 – First acclimatization cycle complete! We’re currently at Everest Base Camp (5300m) as we bring you this update. After close to 5 years of preparation, we’re finally here!

First off, let’s conclude on the Lobuche climb we mentioned in our last update. We reached Lobuche high camp (5,200m) in good shape on 2nd April, stayed for a night and set off for our summit push the next day at 5am in the darkness.

The first part of the climb was mainly on rocks and boulders and it wasn’t long before the sun’s rays hit us. Although we were glad for the warmth, the heat proved to be draining as well and we had to stop halfway to remove our outer layers of clothing.

To make our way to the summit, we had to rope up for safety reasons, as well as clear multiple steep and icy sections with the use of fixed ropes.

After about 6 hours of climbing, all of us finally reached the summit (6,000m) around 10.30am. The Lobuche climb completes the first phase of our acclimatization and we look forward to the next acclimatization cycle up on Everest.

It’s been 3 days since we’ve arrived at Everest Base Camp. At a height of 5,300m, it is higher than the summits of most mountains in the European Alps. We are glad that we are settling down comfortably and have managed to carve out a cosy corner which we will call ‘home’ for the next two months.

The ‘Puja’ ceremony was conducted on the second day of our arrival and it is a religious ritual performed by a lama and the Sherpas to ensure safe passage up Everest. As a gesture of respect, we also participated in the ceremony which included food offerings and prayers.

The weather patterns here are expectedly extreme. We usually have bright sunshine in the mornings until about 3pm when snow starts falling, bringing temperatures down to about -15 degree Celsius. Our tents will be snowed in and we usually huddle in the dining tent for warmth.

Thanks to SingTel, we have successfully set up a communication platform which we are currently using to bring you updates from base camp.

We will be staying here for the next couple of days before we head up for our next acclimatization cycle where we will spend a day at Camp 1 (6,100m).

Just as we were finishing our lunch today, there was a knock on our dining tent door. To our pleasant surprise, we found ourselves face to face with students and teachers from Christ Church Secondary School!

They had come a long way, beginning their journey from Gorak Shep to come visit us. The students and teachers were in good spirits as we hosted them in our dining tent. This journey was meant to inspire and instill confidence in the students and as a gesture of encouragement to the team.

We were immensely touched and inspired by their visit. Each of the students adopted a member of the team as a mentor, and we were presented with littles notes they wrote for us throughout their journey here. We were very encouraged by this and impressed by the strength and perseverance they have displayed in making their way here.

Their notes were written on song sheets which contained songs we’ve learnt as students in Singapore. They said that this was their little way of reminding us of Singapore, but to us, their presence have already brought ‘home’ to us, right here in the Himalayas. 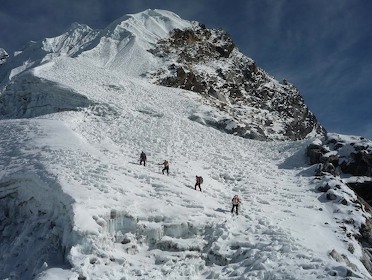 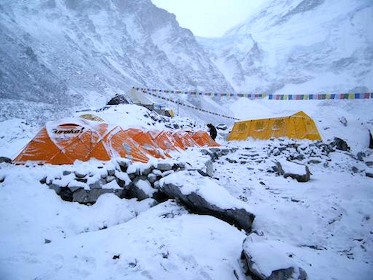 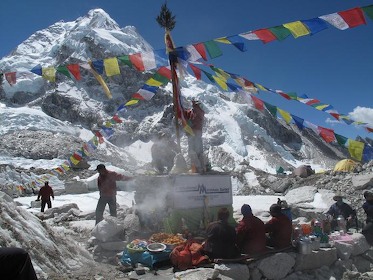 Out of respect for local customs, the team takes part in the Puja ceremony conducted by the Sherpas. (Photo 5 courtesy of Singapore Women’s Everest Team) 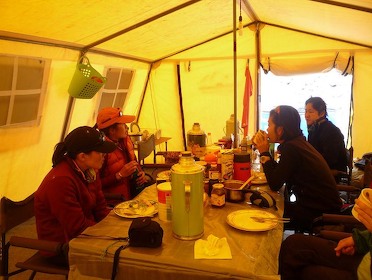 The team have a meal in the dining tent at Everest Base Camp. (Photo 6 courtesy of Singapore Women’s Everest Team)