“In fact, people with bad attitude are the ones who do well.” An interview with Ben Tan – Part 6 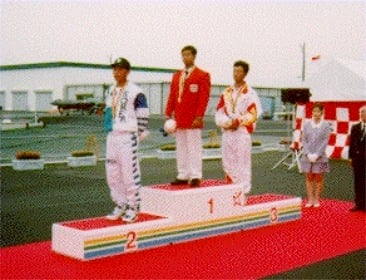 Did you ever think of becoming a professional sailor?
I did. After the Olympics, to go even further, you have to put in dutiful time, you need to moderate your system to become a World Champion as an amateur. I thought I had already gotten away with quite a lot.

Although I knew I was an amateur, but my mentality, my methodology, my discipline was like a professional and with the circumstances I was in, I've gotten pretty far as an amateur already. And to expect myself to go further, I will be pushing my luck already.

So the next step was to really turn professional. But I felt that I couldn't do that because that will take the rest of my life already.

Remember the promise I made to myself, when I've said I will work hard in sailing and I knew there was an end to it. Once I've switched to the other mode, I made a firm decision and I don't go back anymore.

A lot of people retire in sports, but they cannot let go. They kept making comebacks and comebacks, but I don't do that. I've put in everything I had and I'm satisfied I've put in all my effort already, I've got no unfinished business, then I moved on. That's why I never had the urge to go back.

But for the first half, I thought about the values and the process. A lot of people, after they succeed, they rest on their glory and their process deteoriates. They lose the discipline, they lose the methodology and they are not sharp anymore, but they hang on to their past glory. The process needs to be fine-tuned, that's why you need to keep it updated.

So even though I retired from sailing, it doesn't mean, I don't keep myself physically fit, it doesn't mean I sleep in all the time. I wake up early on weekends, 4:30am on Sundays. Weekdays, I wake up at 5am to exercise and for the mental discipline. I work harder than any houseman even though I'm a senior and can take it easy already.

What time do you go to sleep?
The target is usually by midnight, I try not to sleep after midnight. I try to finish my work by midnight, sometimes I finish my work at 1 or 2am, but my waking up time has to be regular because sleeping-in actually makes you more tired and less efficient. By waking up at a fixed time everyday, you set your body clock, so when you wake up, you are more efficient. So it doesn't pay to sleep-in even if you sleep late.

Do you have any worst moments from Sailing?
Not really worst moments, but memorable ones in the sense I learnt a lot. I'm a very technical person, so those worst moments are those technical things too. When I was sailing in an Optimist race in monsoon, I capsized so many times because I was still new, didn't do enough reading and didn't learn enough, so I didn't learn much about how to tune the sails.

I capsized so many times, but I never gave up until I was dead tired and my hands were all bleeding already, then the race official came and told me they will tow me back to shore. Then I said, "Ok I will retire," because when you were retiring from the race you have to tell the official that you want to retire, then he said, "You don't have a choice, the time limit is over already." I was 12 years old, and I learnt this the hard way.

Are you still involved in the Sailing community now?
To be socially responsible, I always contributed back to the sport since I was very, very young in different ways. One was by getting sailing results for the country and the association. The other way is through coaching and volunteer work.

So I contributed all along, but significantly more after the 2002 Asian Games. Because after I won the Asian Games in 1994, subsequently we did have at least bronze medals from Sailing at the Asian Games, but 2002 we came back empty-handed and that was a wake up call.

At that stage, I went back and served in the high performance sailing committee. So I put together a group of people who were willing to contribute back to Sailing, we revamped the whole training infrastructure from the training syllabus, training hours, the fitness test benchmarks, the structure of all the training squads from the base to the top of the pyramid, the incentivisation, the resource allocation. So we revamped the whole training infrastructure based on certain principles.

In sports, ultimately the main driver is competition, we can't run away from that. So no matter how much money you pump in, unless there is a competitive nature or it can't work. So I created a very competitive structure where the base opening is very wide, very broad but you've got to fight like crazy to be on top. Once you are at the top, you can't rest easy because we made it easy for the next level to overtake you. So nobody can rest easy, they have to fight very hard to stay.

So I created that kind of system, you have to work hard to get up there and once you are up there, you have to work even harder to stay up there. So we put this process in place for the next 2 or 3 years and now it is in place already. Now it's the production line already, and the production line is bringing in World Champions. So in the youth level, we've got a lot of success already because of the result of the system. Now that the system is running smoothly already, I've tested the system to see if it is sustainable.

So now even with my hands off, it still works. One way I tested it, was during the selection process, I look at the reaction of the other people in the selection panel. We reached a stage where the system is a purely merit system, whoever wins the trials goes. You can suck up to the coach all you want, it doesn't matter. You can have bad attitude all you want, it doesn't matter. The winner goes. Because in the real world, that's how it works. In sports, that's how it works.

In fact, people with bad attitude are the ones who do well. So we should reward not the people who attend training but the people who win the race. Because as an authority, you can manipulate how the trials is run to actually select who you want to win. So I cannot give you the power to veto the winner, so once I realized they (the selection panel) have gotten the right idea already, then I was ready to step down. So last year I stepped down as vice president, because it should be running smoothly.

How do you rate our chances for the Olympics?
(Ed’s note: This interview was conducted before the 2008 Beijing Olympics)
I don't like to over promise. You have to be realistic. If you want to win an Olympic medal, before the Olympics, you should already be ranked top 20 in the world. Even the world number 10 would struggle.

We are already there at the youth level, if we continue and stick to the principles and get our formulas correct, this group of people will come up to be world class people at senior level and there will be an even stronger group of juniors taking over their place. Provided we can stay on the right path for 2012.

Because when you are successful right, you get a baton drop, because that's when people make mistakes and get over confident. I'll continue to stay in the background, not in the limelight, so hopefully they will know why they are successful these past two years and stick to that rather than deviate because they get greedy. But if we stay on the right path, yes, we'll get there.

You mentioned about portable skills, how have you seen those skills relevant to your career as a doctor right now?
The learning culture. In medicine, you have to keep learning. You have to have empathy, just like the way I treated my sparring partners, I treat my patients as friends. I understand their problems and you have to learn how to work as a team. How good is my physiotherapist, how good is my nurse, or my receptionist? You can be a very good doctor but receptionist no good, patient come in, bad experience, and get angry already.

I'm a doctor, so I depend on the physiotherapist to do the treatment, so working as a team is very important, how to gel the team together and how to motivate one another. There is also the discipline part and being unselfish. When a patient says he needs to see me urgently and my nurse knows the answer is yes because I was the one who chose to be a doctor, as a doctor you are a servant, I serve my patients. You have to know you roles, nobody forced me to be a doctor, I chose.