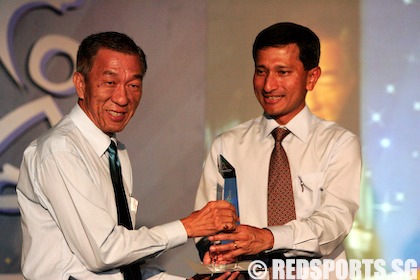 Mr Dick Yip, one of Red Sports’ pioneer writers, was named the winner of the 2008 Active Agers – Infocomm Champion Award. Chosen from a pool of almost 450 nominees, the award honours seniors who have embraced infocomm technology as part of daily life, and is offered jointly by the Infocomm Development Authority (IDA) and the Council for Third Age, an independent body which promotes active ageing.

Mr Yip, who turned 61 years old this week, is a retired Physical Education teacher and grandfather of four. His journey from technophobe to technophile began when the death of his mother in 2007 prompted him to start a blog as a way for his extended family to share memories with each other. He also maintains his own personal blog.

When Red Sports launched in early 2007, Mr Yip was one of its first writers. His understanding of sports and the school sports scene were a great asset to Red Sports, and his articles – which covered a wide range of sports including badminton, netball, volleyball, and football – demonstrated an eye for detail, and a coach's heart for the athlete.

Describing his Red Sports experience, Mr Yip said that writing about sports was the easy part. “But the technical aspect of working on WordPress was beyond me at the time,” he said. “I didn’t know how to do quotes and italics. Quite a few times I wrote, and then I clicked something and all the words disappeared! But I had no choice but to learn how to do it. And I got better at it as time went by.”

The hard work paid off when he saw the finished stories published on Red Sports – “Every time I see how many people have read the stories, I feel so happy.”

At the award ceremony last night, IDA CEO Radm (NS) Ronnie Tay described Mr Yip as "an inspiration and role model to both seniors and younger ones…, demonstrating that age is no barrier to the digital world."

Red Sports is delighted that a member of its crew has received national recognition – congratulations, Coach!