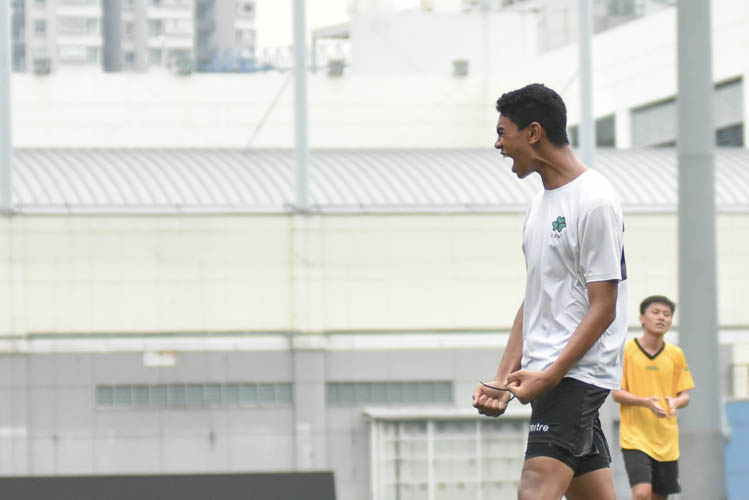 Jordan Efa (SPS #25) roaring in celebration after scoring the winning goal to help St Patrick’s Secondary School to third place in the National B Division School Premier League 1 as Vu Quang Minh (SGS #12) of Serangoon Garden Secondary School looks on. Minh was deemed to have committed a handball in the box which led to the penalty. (Photo 1 © Cheah Wenqi/Red Sports)

Jalan Besar Stadium, Thursday, April 20, 2017 — As he stood with the ball on the penalty spot, Jordan Efa already knew where he is going to shoot. The 16-year-old took one glance to the right before stepping forward to bury the ball in the left bottom corner.

“Before I even went (to take the shot) I already made up my mind,” recounted the lanky midfielder, who scored the winning goal in the 2-1 victory as St. Patrick’s school (SPS) clinched third place in the National B Division School Premier League 1 over Serangoon Garden Secondary (SGS).

“I always take the penalty and I always shoot to my left,” said Jordan (SPS #25).

After being delayed by lightning warning, the third and fourth placing match ended 1-1 in normal time following goals by Dhiraj Rai (SGS #19) in the first half and Keshav Kumar (SPS #5) in the second and needed extra time.

SGS settled in very quickly into the game from the kickoff, calmly keeping possession and probing the SPS defence line with their passes. SGS may have had more possession of the ball but it was SPS who looked more threatening on the attack.

SPS’s Amir Hafiz (SPS #4) had a couple of big chances early on in the game and could have put his team in the lead.

Latching on to a long ball, the forward managed to beat both his marker and SGS’s goalkeeper Ashley Toh (SGS #20) but his shot was too weak as Aayush Gurung (SGS #16) sprinted back in time to clear the ball off the line.

Despite these chances, SPS still could not dominate the proceedings of the match. But where they lack in possession, they make up for it in the disciplined performance of their defence.

After finding no luck trying to break into the SPS defence, the boys in yellow tried a different approach and found their breakthrough two minutes from halftime.

When Dhiraj Rai (SGS #19) received the ball near the centre circle with no defenders around him, instead of powering through the middle, he looked up and tried his luck with a powerful long range shot. Lionel Tiong (SPS #20) could sense that he was out of position and immediately backpedalled and attempted to punch the ball away but he could not recover in time as the shot cannoned off the crossbar and into the goal.

After the halftime break, SGS had more chances in the opening minutes through Dhiraj Rai (SGS #19) and Alfian Saputra (SGS #10) who had one-on-one chances against SPS’s goalkeeper but they simply could not convert their chances.

Comfortable with their lead and with SPS unable to make much of a headway, SGS seemed to ease their foot from the pedal and SPS was quick to turn the tide and punish them.

SPS was awarded a dangerous free kick just outside the box around the hour mark after Jordan Efa (SPS #25) was fouled. Ethan Ang (SPS #23) stepped up to take the kick and his shot was heading for the top left-hand corner but SGS GK was alert and reacted fast to palm the ball away for a corner.

If this was a warning shot, then SGS did not heed it. Eight minutes later, SPS came back to punish them through another set piece. A long free kick from near the centre circle found its way to Keshav Kumar (SPS #5), who somehow managed to chest the ball home for the equaliser to loud cheers from the stands.

Not long after the equaliser, SPS pulled back their skipper Philip Koshy (SPS #8) behind as they look to shore up their defence and rode out the final minutes of normal time. Tired legs in extra time meant that the play was very much stuck in the middle of the park as the players began cramping up.

Both teams looked unlikely to score but the deadlock was finally broken through a handball by Vu Quang Minh (SGS #12) in the box. In his attempt to clear an incoming free kick, Minh was deemed to have used his hands by the referee, who duly pointed to the spot.

Jordan Efa calmly stepped up to take the penalty, powering home the winning goal with virtually the last kick of the first period of extra time. In the second period, SGS threw caution to the wind and kept searching for an equaliser but they could not get past a careful SPS and had to settle for fourth.

After the match, SGS’s coach Mohammad Hasren said he was still satisfied with the performance of his team despite their loss.

“I think the extra time really took its toll because they had a very long season,” said the 42-year-old coach, who has been with the school for 15 years.

“I think to be fair, to finish last four in the tournament is a bonus, we were actually only looking at reaching the last 16.”