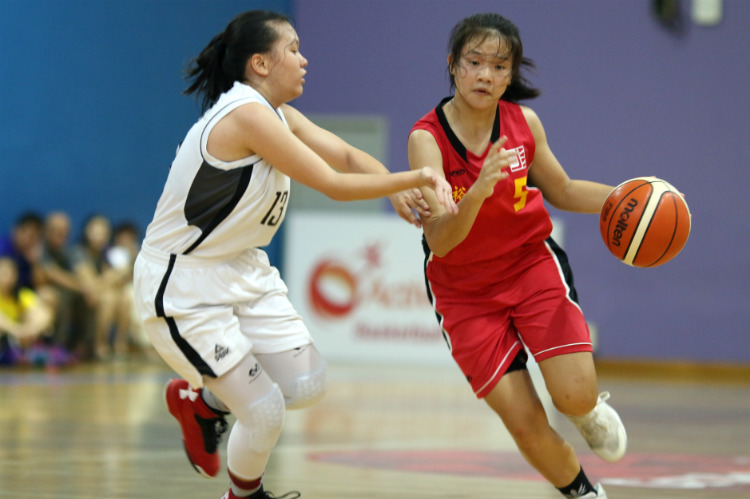 With this win, Jurong stays undefeated with a win-loss record of 6-0. They advance as first seed of Group X and will play against North Vista in the semi-final.

On the other hand, this loss gives SCGS a 5-1 win-loss record putting them in second place of Group X. They will play Christ Church next in the semi-final.

While SCGS tried to fight back, their shooting was sloppy and they could not capitalise on their many chances.

Meanwhile, Valarie was hot on form, making her shots and creating plays for her teammates. This allowed Jurong to pull away as they led by 14-7 after the first quarter.

Valarie started the second quarter with the hoop and the harm. While she missed the free throw, Tan Kangyi (JS #12) was there for the put-back and one. She went on to make the free throw to increase their lead to 12 points.

SCGS simply had no answer to Jurong’s shooting, struggling both offensively and defensively.

Mabel Anton (SCGS #10) scored an under-basket to beat the buzzer but Jurong were still up 29-17.

Both teams got off to a slow start in the third. They went scoreless for 5 minutes and 40 seconds before Mabel Anton (SCGS #10) made a shot for SCGS. Patricia Orenza (SCGS #7) made another jumper to cut the lead farther.

However Jurong were still up 29-21 at the end of the third quarter.

SCGS came into the fourth determined to make something out of the match. They were able to stop Jurong from scoring while shooting well from the field themselves. As they continued to make their shots, Patricia Orenza took and made a three to cut the lead down to just one.

Jurong then stepped up the game, knowing they had to win in order to advance as first seed which would make their path to the final more favourable. They started driving in more and managed to draw fouls to go to the free throw line. Jurong capitalised on their free throws to increase their lead again.

Jurong’s clutch free throws down the stretch eventually sealed the deal as they took down SCGS 44-32 to remain undefeated.

Captain Alicia Quek (JS #9) of Jurong said, “We tried to protect the ball more against their defence, but both teams fighting spirit were very strong and we just had to have the courage to play against them.”

“When they almost caught up, we were nervous but our coach told us to calm down and focus on the game. We just continued to fight hard”

Jurong’s vice captain Valarie Lim (JS #5) added, “I think their (SCGS) defence is tough and aggressive. We try to reduce mispasses and try to draw more fouls with our plays and it worked.”

“This journey is memorable for us and we hope we can continue to fight hard for our last two games.”