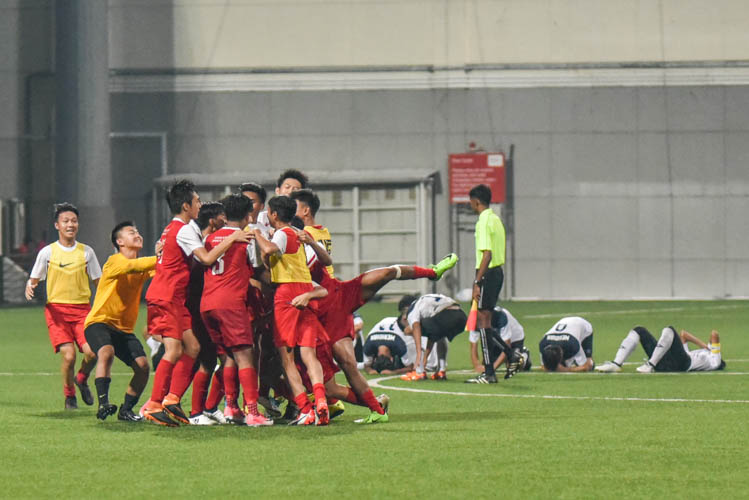 Jalan Besar Stadium, Thursday, April 20, 2017 — After going undefeated since the round of 16, Singapore Sports School (SS) were staring defeat in the final after going behind twice. They needed a last-minute equaliser against Meridian Secondary (MS) before taking the National B Division School Premier League 1 title on penalties.

Down 1-2 in the dying minutes of normal time, Sports School equalised with virtually the last kick of the game when Mhd Nur Adam (SS #3) scored from a long range free-kick from the right. Marc Ryan Tan (SS #17) then completed the comeback with the winning penalty after Lai Jia Jie (MS #9) and Muhammad Fikri (MS #14) missed for Meridian.

Singapore Sports School’s coach Teng Wei Keen said he had been monitoring Meridian’s results throughout the competition and knew that it would be a “close fight” in the final.

“I think it was quite an evenly fought match so the opponents, to their credit, I think they gave us a good fight,” he said after the match.

Meridian unexpectedly took the lead in the opening minutes of the game with Danish Qayyum (MS #7) scoring straight from his corner kick after Sports School’s defence were found napping. Most teams would have panicked but Sports School regrouped quickly and settle into the game, holding possession calmly and not rushing their play.

Sports School began dominating in possession with Elijah Lim (SS #6) displaying good awareness in the middle of the park and dictating the play well. But for all their slick passing, the boys in red still struggled to make any headway against a dogged Meridian defence who were more than willing to put their bodies on the line to block a shot.

With their control of possession, the boys in red kept on pressing and probing the Meridian defence, launching wave after wave of attacks and it was a matter time before their persistence paid off.

A lob into the box in the 37th minute was cushioned and laid off perfectly by Mhd Khairul Ikhwan (SS #8) for his teammate Abdul Rasaq (SS #10) who smashed it first-time into the bottom left-hand corner. No fancy celebrations, the Sports School forward immediately ran straight into the goal to pick up the ball to restart gameplay.

While Sports School had the momentum and composure on the ball, Meridian had the physical advantage and were able to muscle their way into winning the ball when it counted.

Muhammed Ariffin (MS #10) did a good job holding up play up front, bringing his teammates into the game and causing problems for the Sports School defence but the lanky forward could only do so much with Sports School running the show in midfield. It was only through set pieces that Meridian really shone as they showed in the second minute of the second half.

Presented with a free kick on the right, Muhammad Danial (MS #5) saw that Wilson Lim (SS #1) was off his line and tried his luck with a looping shot towards the goal. The powerful dipping shot caused Wilson to backpedal quickly but the goalkeeper could only punch the ball into his own goal.

From here on, Meridian held its lead precariously as Sports School piled on the pressure further, desperate to find an equaliser. Tempers began to flare up as tackles from both sides began flying in and Meridian saw Muhammad Danial (MS #5) sent off in the final minutes of normal time for a second bookable offence.

The sending off proved a turning point as Sports School equalised a couple of minutes later to further compound Meridian’s misery. The extra time yielded no goals as the game went into penalties.

Despite the loss, Meridian’s coach Fabio Da Silva said his boys played a “fantastic match”, especially considering that they played with 10 men in the last 20 minutes of the game.

“Even though we lose one player … the boys worked very hard without one player and of course, you know, we are proud because the boys keep at it till the end, to come to the penalty kicks,” he said.

“I would say that they were blessed to score the goals, you know? We cannot ask anything much more from our players.”