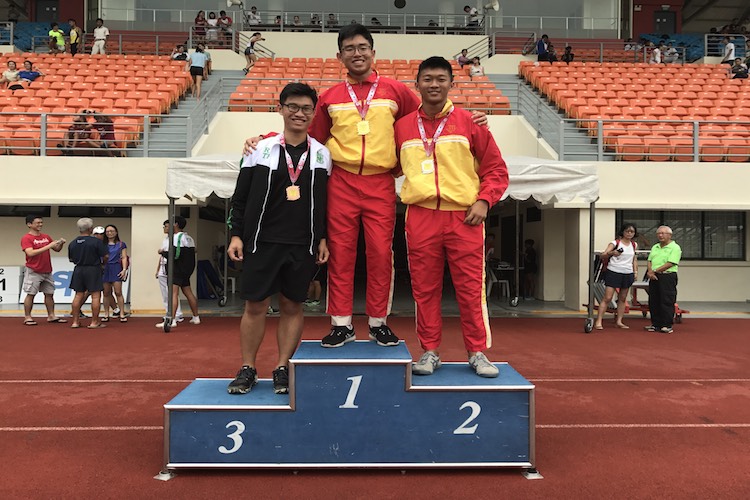 Justyn Phoa (centre) smiling with his gold medal during the prize presentation beside Wang Tingjia (right) and Tan Yi Ren (left). Justyn’s throw of 59.06m broke the national schools and championship record that has stood since 1970. (Photo 1 © Clement Tan/Red Sports)

Hwa Chong Institution, Wednesday, April 19, 2017 — When Hwa Chong Institution’s Justyn Phoa lined up to take his fourth throw in the A boys’ javelin competition, he was trailing junior teammate Wang Tingjia in second. A few minutes later, he not only bettered Tingjia’s best throw, but also a national schools and championship record that has stood since 1970.

Justyn threw 59.06m, which improved on the 58.08m set by Kok Wai Leong, then of Raffles Institution. Tingjia — who set a new B Division record last year with 56.90m — won the silver this time with 56.65m and RI’s Tan Yi Ren claimed the bronze medal with 52.22m. This was also Justyn’s first-ever national schools gold medal after a silver last year in the A Division and a bronze in the B Division before that.

“Tingjia and I were both going for the record this time round,” said Justyn. “When the javelin left my grip, I knew it would be a good throw. I just didn’t know how good it would be.”

In an Instagram video story posted on the Hwa Chong track and field team’s account, Justyn’s schoolmates could be seen and heard going berserk after his record-breaking throw. Justyn’s two elder sisters Lenis and Genis, who also represented Hwa Chong in their time, split several javelin divisional titles between them.

“They definitely helped me, but more with the competition strategy aspect of things,” said Justyn. His sisters are currently studying physiotherapy in Dublin and Perth, but he made sure to contact them after his record-breaking feat. Boys in the A and B Divisions compete with a 700g javelin, compared to the 600g boys use in the C Division.

“We whatsapped and skyped after that for sure,” said Justyn’s mother, Teo Mui Hua, who witnessed her son’s history-making effort. “I knew he probably won with that throw, but I didn’t realize he broke the record until much later.”

RI swept the other boys titles this year. Roy Ng posted 51.61m to beat Rohan Verma of Anglo-Chinese School (Independent) and Ho Yan Jie of Catholic High School into second and third, respectively, in the C Division. Kynaston Wee claimed the B Division crown with 51.10m.

“It’s a big surprise since this is my first year in the B Division, but I guess this is what happens when you’ve got nothing to lose,” Kynaston said. In claiming a new personal best though, he overextended his right knee and anticipates recovery to take about a month or so.