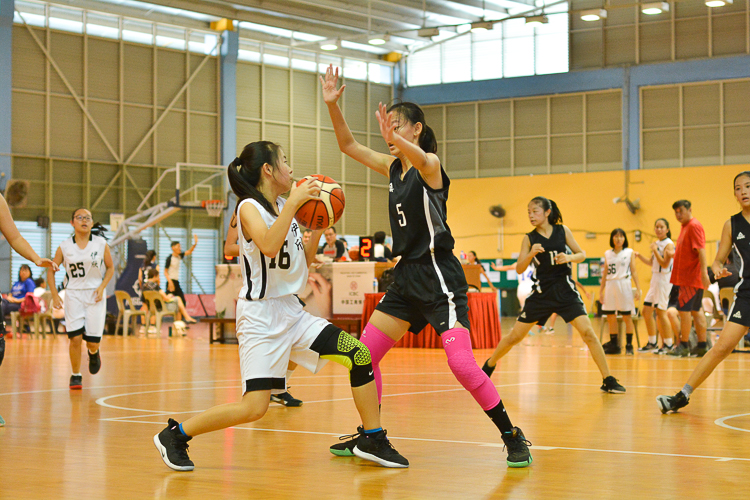 Maeva Loo (SCGS #5) and Sarah Goh (SCGS #13) mirrored their performance in the opening game by being joint top-scorers with eight points. AIS #37 contributed two points, while AIS #6 followed behind with one point.

SCGS captain, Jian Yue (#11), had this to say about the win:”I think we concentrated more this game and stayed more focused. We were less selfish as a team and passed the ball a lot faster.”

SCGS vice-captain, Maeva Loo (#5), added:”We hogged the ball a lot less today and distributed the ball amongst our teammates.”

It was evident from the start that SCGS sought to rebound from a sloppy display in their first game and this was evident in the opening quarter. SCGS made an effort of swinging the ball around the perimeter before striking at openings that would show itself in the AIS defence. This allowed them to drive the ball to the rim at will, getting many high percentage shots. SCGS were stout defensively as well, as they generated a lot of turnovers and scored on fast breaks. AIS struggled offensively, as they could not string together passes properly. Their first points of the game came when AIS #6 sunk one of two free throws to put them on the board.

The second quarter saw SCGS pull away with the lead. Maeva Loo (SCGS #5) made good use of her length to disrupt the passing lanes and get turnovers. SCGS primarily looked to attack the rim when AIS did not have their defence set at all, allowing for easy shots. AIS struggled to find a way past the SCGS defence through this quarter, although they did manage to score on a lay up through AIS #37 when an SCGS player dropped the ball in her own half.

Unfortunately, those were the last points that AIS could muster against SCGS. SCGS put on a good defensive show in the second half. This forced AIS to take ill-advised shots and led to many multiple misses. SCGS were able to win the third quarter decisively on the back of their transition offence. Being able to turn a gear the moment the ball was turned over to score on the fast break.

SCGS held nothing back in the final quarter, putting in a full court press to seal the game off. They also showed good fundamentals to box out in the paint, allowing them to secure rebounds on both the offensive and defensive end. Despite their accuracy issues in scoring at the rim, they were able to offset that disadvantage by holding AIS scoreless throughout the quarter.

The win puts SCGS at the top of Group Z and they will move on to the second round group stages with a 2–0 record. AIS fall to second in the group with a 1–1 record by virtue of point difference over Deyi Secondary.

Jian Yue (SCGS #11) added this about her teams’ ambition this season:”We want to win zonal champs and the overall goal for the season is to hopefully make national semifinals.”

On what the team could do better in future matches, Maeva commented:”I think we have to be more accurate with our shots under the basket. Furthermore, we would do well if we move the ball around a lot faster.”