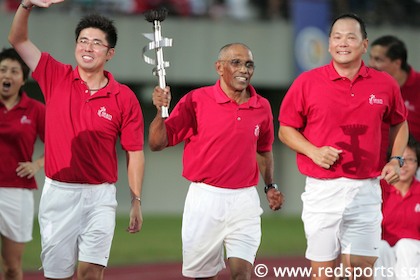 National Stadium, Saturday, June 30, 2007 – When C. Kunalan held aloft the torch and ran the National Stadium lap, those who were old enough must have transported back 34 years in their minds.

That’s because in 1973, C. Kunalan was the first person to light the cauldron at the National Stadium and this evening, he lit the cauldron again for the very last time.

While I did not witness the first lighting, watching Mr Kunalan run up the steps to the cauldron made me acutely aware of the passing of time, that I was seeing the end of one cycle of life, not just for the Stadium but for a generation of Singaporeans who have grown up with the National Stadium.

The National Stadium has represented the pinnacle of sporting achievement, even at school level. The stadium has been the stage for many triumphs and defeats at Inter-School Track and Field Championships. Many students would have walked through the turnstiles to cheer on schoolmates. For those talented enough to make the ‘A’ Division football finals played at the National Stadium, the experience of playing on the well-manicured pitch is indelibly etched in their hearts and minds.

No one can argue that Mr Kunalan deserves the honour of lighting the cauldron for the last time. For while many sporting talents have shone early and then faded away, Mr Kunalan continues to burn brightly for Singapore as a sports lecturer and administrator.

So all 40,000 stood and cheered as the cauldron was lit one last time. The man who held the Singapore 100m record for 33 unbeatable years then headed back down the steps with spectators on the left and right cheering and taking pictures. He had a friendly smile for all, his grip on the torch firm, his step sure.  This is the end of a chapter, the tearing down of the old, and soon the building of the new. The torch is passed now to the next generation. 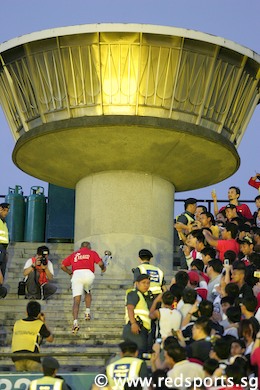 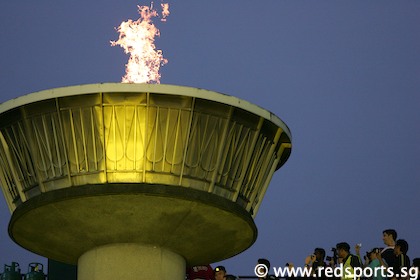 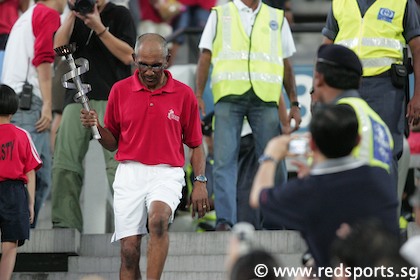 C. Kunalan runs back down the steps of the National Stadium after lighting the cauldron. (Photo © Leslie Tan/Red Sports) 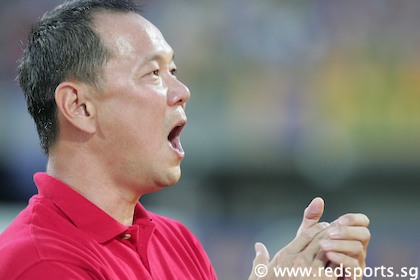 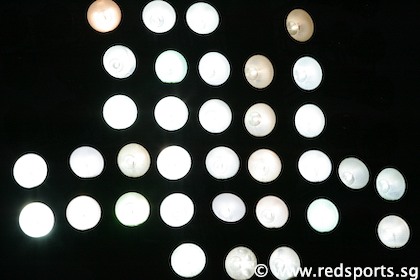 The floodlights, with a few blown ones. No more need to maintain them anymore. (Photo © Leslie Tan/Red Sports)