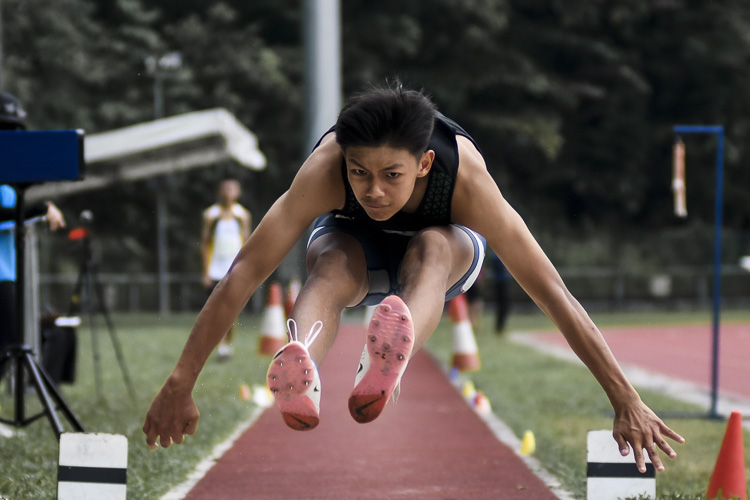 Bukit Gombak Stadium, Friday, April 29, 2022 — Coming into the National Schools meet with a personal best 6.13 metres in the long jump this year, Raffles Institution (RI)’s Garrett Chua knew he had every chance of gunning for the C Division boys’ record of 6.40m that had stood for 15 years.

“I can’t say that I was expecting it, but I was always hopeful that I would get it,” said the 14-year-old. “It’s kind of something I’ve wanted and put my mind to.”

And Garrett’s hopes slowly grew with every jump in the final, recording 5.99m on his first attempt and 6.39m on his second — just one centimetre shy of that record set by RI old boy Syafiq Poh Shahabidin in 2007.

Garrett knew that his third jump would be pivotal.

“I just had to concentrate and put all my effort into that one jump… because I knew that after that, my energy would go down,” he said.

“So that needed to be the jump that I needed to get the record.”

One perfectly-executed run-up and leap off the board later, Garrett found himself in the record books with a distance of 6.44m, comfortably seizing the gold ahead of Hwa Chong Institution (HCI)’s Ethan Kong (6.00m) and Singapore Sports School’s Jase Low (5.60m).

The mark is also a new national under-15 record.

“I really had no expectations of hitting 6.4 (metres), but I just had to hope… and hope got me that jump,” added Garrett, who trains under RI jumps coach Fuad Idris as well as his club coach, Benber Yu of Team Cicada Trackers (TCT).

Coach Fuad claimed that self-belief was paramount for Garrett’s performance in the event.

“He always knew, subconsciously, that he wanted to go for the record, but he knew that fixing the run-up today could make or break him,” said Fuad.

“During practice, we tried to get the proper technique coming off the board… but today, he truly excelled and was able to push the way he’s supposed to push on the take-off.

“It was a big win for the team… and of course, he broke the previous (RI) old boy’s record, so the record stays within RI… everything is good,” Fuad added.

A versatile athlete, Garrett was also champion in the C Division boys’ 100m hurdles two weeks ago, crossing the line in a huge personal best of 13.94 seconds. He was the only hurdler in the race who went under 15 seconds — let alone 14s — finishing ahead of Rafael Chong (15.08s) of Hwa Chong Institution and Sean Gerard Yoo (15.16s) of Anglo-Chinese School (Independent).

It was Garrett’s first time dipping under the 14-second barrier, with his previous PB the 14.20s he clocked in the heats, and 14.48s prior to that set last November.

“I feel very satisfied with my (hurdles) performance, it was also quite a big PB for me,” said Garrett, who attributed his jump in performances this year to perseverance and “lots and lots of training.”

His sprint hurdles-long jump double gold proved to be an extremely rare one, with Ho Wee Teck of St. Patrick’s School the last athlete to achieve it in the boys’ C Division all the way back in 1974.**

In an event which was postponed from Monday (April 25), Chloe’s mark was a jump from her previous competition best of 5.07m set as a Secondary 1 athlete last July at the Singapore Athletics All-Comers Meet 4.

Like Garrett, Chloe has more than one specialty, having claimed gold in the 100m sprint last week.

**Note: Archives go back until 1970; missing results in some years.