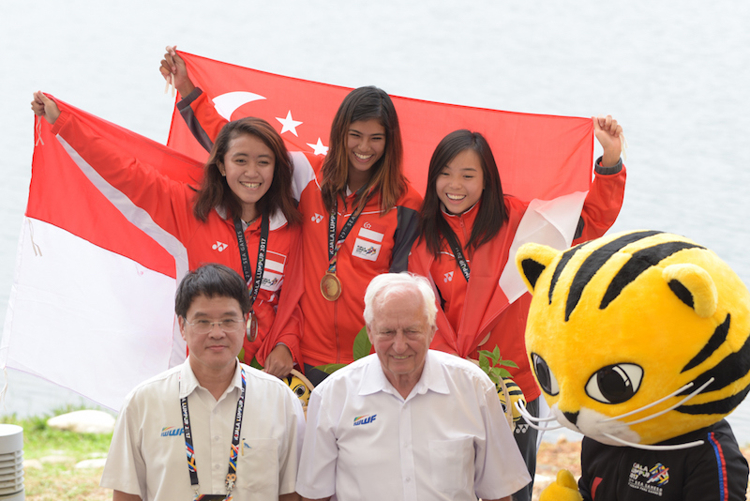 Putrajaya Water Sports Complex, August 26, 2017 — Gusty winds and streaks of lightning could not deter Sasha Christian’s defence of her SEA Games gold medal on Saturday as she scored 62.78 to mark a successful comeback from injury.

Gooi Jia Yi made it two out of three for Singapore at the podium after clinching bronze with a score of 36.89 but the weather almost threatened to rain on their parade, delaying the competition. Amidst the nerves and inclement weather, however, the two girls were unfazed.

“You know whatever happens out there, we’ve wake boarded through more challenging situations so there’s no need to worry about anything, the water, the weather, we’ve done it all,” said the 24-year-old Christian, who only began competing again in March.

“It’s a huge honour to be competing in the SEA Games and I’ve learnt that nothing is a given and every day I just got to work towards that goal,” added Christian.

Going into only her third competition since fracturing her right shin last July, Christian said she depended on a lot of “dry” practice to get into her zone. Before her competition run, Christian would tie her handle to a pole and visualise her wakeboarding routine.

She said she began doing the practice during her injury period and has continued to use it as part of her preparation routine.

“When I was injured I wasn’t able to wake board for like six to seven months, but in the last three months my leg was better so I could walk but I still wasn’t strong enough to wakeboard so I turned to dry practice a lot,” said Christian.

“I’ve learnt that I just got to remember how it feels like on the water.”

For Gooi, her bronze medal tasted a lot sweeter after missing out on the podium by just 0.6 points in the last 2015 SEA Games. The 18-year-old Hwa Chong Institution student admitted that she was really nervous while waiting for the results despite landing her barrel move.

“It was really close, I thought the competition was close but thankfully my intensity was much better,” said Gooi, 18.