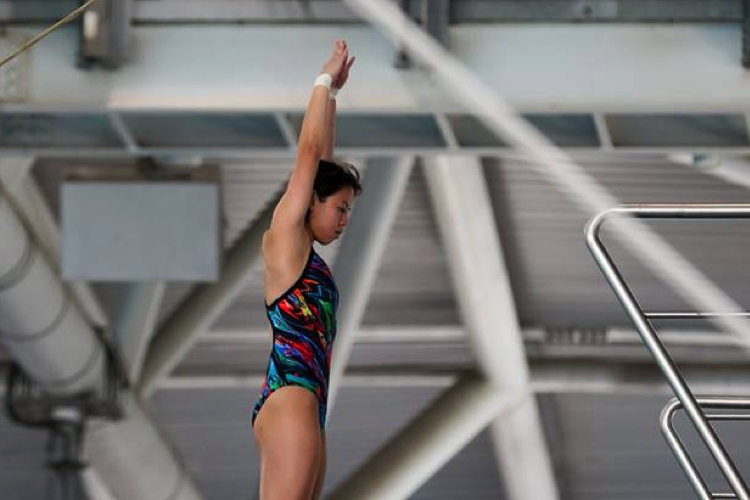 Myra Lee was the only competitor in the Women’s Open 10-metre Platform event at the 8th Singapore National Diving Championships and she finished with a respectable score of 241.40 points.

Lee had a disappointing opening dive, an inward 2½ somersault, which saw her score a low 23.80. She had opened up from her somersault too early which resulted in a poor entry.

The appearance of a blue-coloured banner caused the 22-year-old to lose her concentration during her dive, said Lee. Sighting is a key component when it comes to helping divers know roughly where they are in the air in order for them to complete their dives.

“I got a shock, I normally see only white but because I saw the banner I just completely got lost in the air,” said Lee.

To Lee, this event was very important for her SEA Games preparations as she had just changed her programme and needed a rehearsal.

“My second, third and fifth dives were all new dives, so I’m trying them out. I got a bit anxious up there.”

Despite the unfamiliar dives and environment, Lee still managed to put the first two dives behind her to recover and score a high of 54.45 in her third dive, an armstand back triple somersault, and 62.35 in her fourth dive, a back 2½ somersault.

Lee was back in action again in the afternoon session where she competed alongside her teammate, Freida Lim, in the Women’s Open Platform Synchronised where they took home gold with a final score of 262.98.

Following the first dive, the Singaporean girls were ahead of their only other rivals, Leong Sut Chan and Leong Sut In of Macau, by a small margin of 0.6 points. A clean second dive from the Macau pair then saw them take the lead back from the Singaporeans by 7.8 points.

However, Lee and Lim managed to claw their way back after their third dive to pull clear of the Macau pair by 15.6 points. The third dive was a turning point for the Singaporean duo as they extended their lead over the fourth and fifth dives to ultimately finish 52.53 points ahead of the sisters from Macau.

“I think for the basic dives, we could clean it up a bit more, but I haven’t done my back dives since a month ago and my twisters since a week ago, so I was quite happy with today,” said a relieved Lim who has been plagued by an abdominal injury over the last few weeks.

Also in action today were Fong Kay Yian and Ashlee Tan who managed another first place finish for Singapore in the Women’s Open 3-metre Springboard Synchronised with a final score of 246.81.

The two girls were trailing Kam Ling Kar and Adeline Chin Wei Ling of Selangor after the first three dives before coming home strong to edge them out by 13.14 points over the last two dives.

Lee, Lim, Fong and Tan will all be heading to Macau for the Asian Diving Cup where they will face long-time rivals and SEA Games favourites, Malaysia.