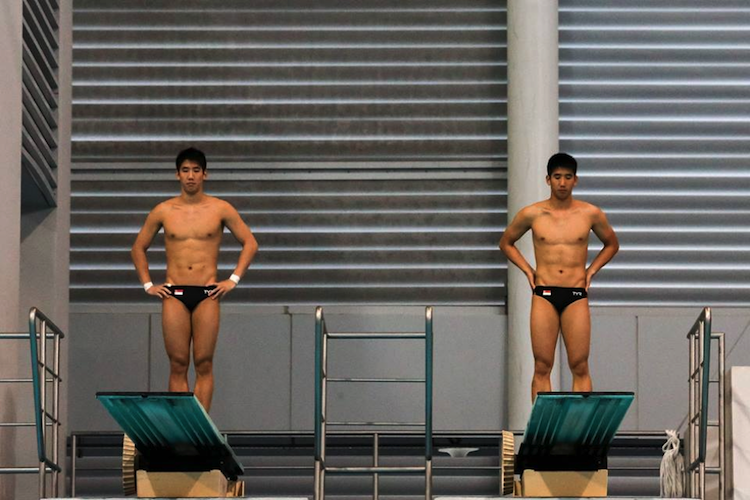 OCBC Aquatic Centre, Saturday, June 10, 2017 — The diving twins, Timothy and Mark Lee, were completely in sync as they bagged the gold medal in the 8th Singapore National Diving Championships Men’s Open 3-metre synchronised event with a final score of 368.16.

Their only other competitors, Tang Hio Fong and Leong Kam Cheong of Macau, finished with a score of 259.95.

From their very first dive, a back dive, the twins took a six-point lead over the pair from Macau. By their third dive, they had pulled clear of them by more than 40 points. The two brothers kept their focus and put up a solid performance over their last three dives, scoring consistently well in both execution and synchronisation.

The twins did not score anything below a 7.0 on their synchronisation scores and even managed to hit a 9.5 in their second dive, a reverse dive. This saw them comfortably qualify for the 3-metre synchronised event at the World Championships this July.

“We learnt a lot of things from our last competition in Puerto Rico and we have been working closely with Coach Shannon on really attacking the dives and fine tuning all the small details which are really starting to show,” said a delighted Timothy after the competition.

Timothy, who is heading to Macau this coming Monday for the Asian Diving Cup, felt that this competition and qualifying for World Championships really gave them a boost in confidence before they face stiffer competition in Macau.

“The aim of this competition is to prepare for Asian Cup next week and SEA Games, but more importantly to qualify for world champs first,” he added.

“It’s also still a good prep for Macau because the SEA Games team for Malaysia will be there and they are our main rivals at SEA Games.”