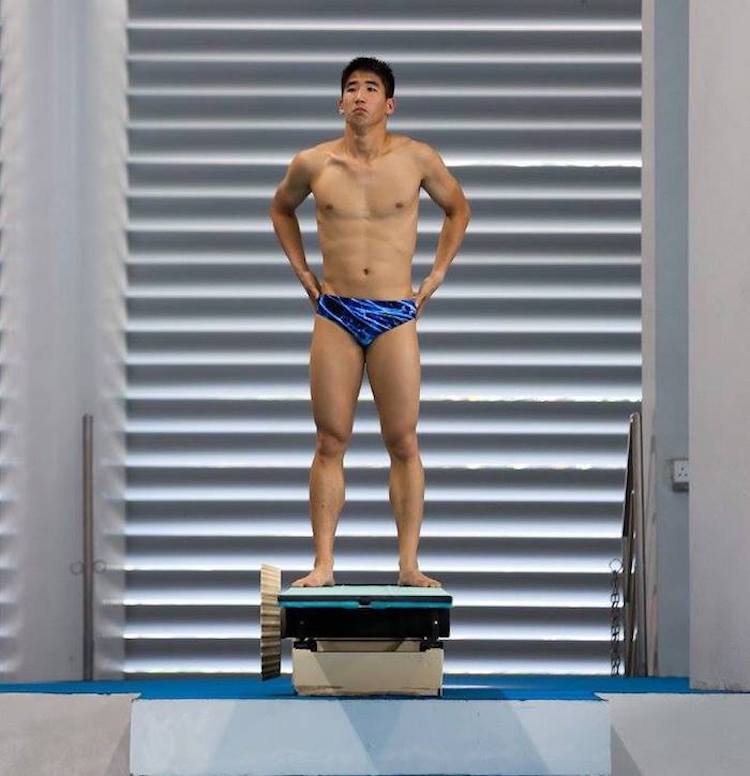 Timothy Lee preparing for his dive during the first day of the 8th Singapore National Diving Championships. (Photo 1 courtesy of Singapore Swimming Association)

Their respective scores of 333.50 and 326.80 easily surpassed that of their only other competitor, Macau’s Leong Kam Cheong, who finished 3rd with a score of 246.50 at the 8th Singapore National Diving Championships.

The 22-year-old twins had a cracking start to their programme with an inward 2½ somersault which saw Timothy narrowly taking the lead by one point.

Mark had a neat entry on his second dive, a forward 2½ somersault, to pull ahead of his brother, by 2.1 points.

The 3rd dive was the decider that eventually saw Timothy pull away from Mark. With a difficulty rating of 3.0, the forward 3½ somersault was no easy feat. The two brothers had difficulties in their entries leading to a drop in their scores. However, Timothy had the stronger dive and managed to gain a massive nine-point advantage over his twin.

Meanwhile, 18-year-old Leong of Macau managed to hold his own in his dive programme. Despite his lower difficulty ratings, as compared to the twins, he still managed to pull off 7.0s in his first and third dives.

Timothy managed to hang on to the lead over the last three dives to comfortably take home the gold medal and a personal best. Mark also finished strongly and maintained his focus to close the nine-point gap by 2.3 points to finish second.

Mark and Timothy will next compete in the World Championships in July before flying to Kuala Lumpur for the 2017 SEA Games.