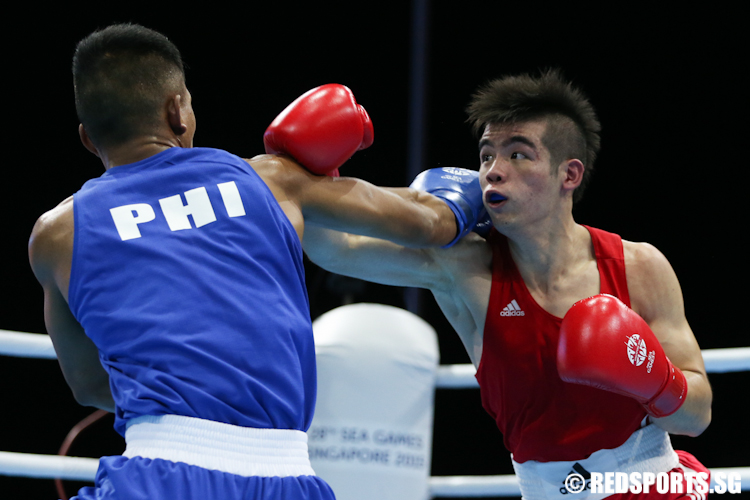 EXPO Hall One, Wednesday, June 10, 2015 — Singapore’s Tay Jia Wei suffered an early dismissal with a decisive blow to his head from Filipino Marcial Eumir Felix, and had to settle for a silver medal in the men’s welterweight (69kg) finals bout.

Jia Wei began his bout with considerable distance between him and his opponent. A half-head height clearance for the Filipino over the Singaporean also did not prove useful for the latter.

The first round commenced with much movement from Jia Wei, who constantly kept on the balls of his feet and bounced a lot. Unfortunately decisive jabs from the Filipino saw Jia Wei lose his footing for a moment. Nonetheless, with a straight right hand, followed quickly by a left hook, Jia Wei managed to catch his opponent.

Unfortunately, the second round was not as pleasant for Jia Wei, as a quick left hook by Marcial early in the round saw him being knocked out, bringing an end to this final bout.

On his performance, Jia Wei said, “He just caught me one hard shot and I went out. Anything can happen in boxing… he landed one good shot and that’s enough to end the fight.

On his silver medal performance Jia Wei commented, “(I’m) not very satisfied because I really wanted to win the gold medal so badly and I’m disappointed with myself that it ended in the second round, just like that.”

When asked about how he felt he could improve his performance, the 19-year-old responded, “More of my movement and ring experience, I guess. Because people don’t know that I have 19 fights under my belt coming into SEA Games and that is extremely little for a boxer at this level. Yet, I am able to perform as well as the rest. The other boxers fighting against me have 50, 80, 100 fights, so I will just take it as an experience and come back stronger.”

For the silver medallist who is still fighting for support from his family towards his pursuit of his passion, he acknowledged, “They are afraid that this kind of thing (a knockout) would happen to me. In fact, the reason why I am feeling so sad is because I don’t want them to see me in this state, like what happened just now.”

Still, this loss will not be enough to deter the rising star, who has said he will be taking a short break before coming back into training and competitions.