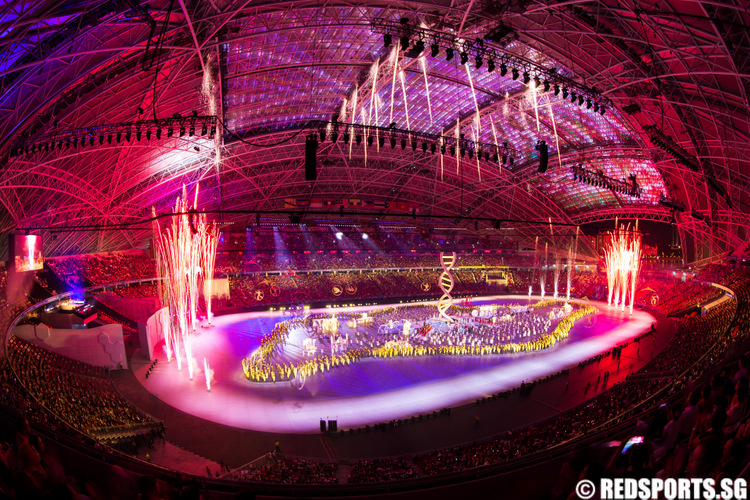 The 28th SEA Games kicked off with a sell-out opening ceremony at the National Stadium. (Photo 1 © Lim Yong Teck/Red Sports)

National Stadium, Friday, June 5, 2015 — After a 22-year hiatus, the Southeast Asian (SEA) Games is back in Singapore for its 28th edition and kicked off with a spectacular opening ceremony in front of a sell-out crowd.

Featuring 36 sports and 402 events, this year’s Games is held in conjunction with the Singapore’s 50th year of independence and will mark the Republic’s fourth time hosting the Games.

The two-hour show, directed by creative honcho Beatrice Chia-Richmond and her team, is the first of its kind at the new National Stadium and features about 5,000 performers and volunteers from various institutions and organisations.

Touted as the “most technically-demanding” show, the use of 160 high-definition projectors to generate brilliant floor projections and a customised aerial system allowing performers and props to ‘fly’ in the stadium were one of the main highlights of the show.

About 7,000 athletes and officials from the 11 participating countries were involved in the athletes’ parade and the Singaporean contingent, represented by 748 athletes, was led by flag bearer Quah Ting Wen (swimming).

After the address by Minister for Culture, Community and Youth and Chairman of the 28th SEA Games Organising Committee Lawrence Wong, the Games was declared open by President Tony Tan and the official Games and Federation flag was raised to the song ‘Reach’, which was performed by local songwriter Dick Lee and the Methodist Girls’ School choir.

The show culminated with the torch relay and the lighting of the SEA Games Cauldron by national football icon Fandi Ahmad and his son, Irfan Fandi.