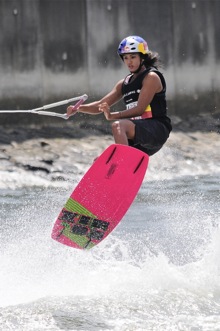 “I’m really happy I won the Women’s Open,” said Sasha, who also won gold at the 2011 South-east Asian (SEA) Games. “The West Side Jam was my first competition of the year so I’m glad it started off well.”

This bodes well for the coming year as Sasha will be competing in the Asian Beach Games and Asian Championships where she has set her target of making it onto the podium for each of those competitions.

The competition attracted participants from Thailand, Philippines, Australia and the USA.

Defending his crown in the men’s category was Thailand’s Padiwat Jaemjan, also known as ‘Bomb’, who is also a SEA Games gold medalist.

The Men’s Open Wakeboard stepladder finals was an exciting affair in the semi-finals with Padiwat, Aye Tatsanai, Shawn Watson and Mark Griffin executing all manner of inverts, flips and spins. The head-to-head final was eventually won by Shawn Watson over Aye Tatsanai. Padiwat had to settle for fourth place.

Amongst the other local representatives were Miguel Chew, Chris Yeo and organizer of the event, Ryan Lee.

Miguel has been wakeboarding for three years and this year, he did well in the qualification rounds on Saturday but found the conditions more difficult in the finals.

Former national bowler, Chris Yeo, coming back from a nasty leg fracturing injury last year, had a great time but lacked the technical skills to progress to the finals in two out of the three events he participated in. However, finishing in third place in the Mixed Wakeskate category was still an achievement to savour.

Veteran Ryan Lee showed what a classy wakesurfer he is. He amassed 90 points and topped the qualifiers for the event finals with cool moves surfing behind the waves of the powerboat. From right down with body on the wakeboard and paddling in the surf to cheeky poses, his performance in the qualification round made the crowds cheer and howl.

Age matter little when it comes to wakeboarding. The youngest competitor was aged seven years and was photographed showing confidence with his routine on the water. Veterans in the sport were in their 40s and giving the youngsters a good run for their money.