Clara Wong steps up as top woman at Singapore Biathlon 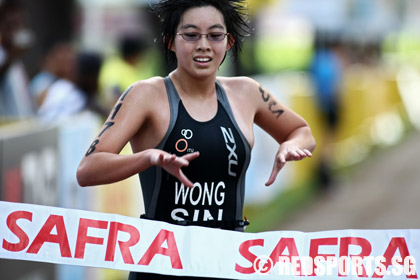 The 18-year-old Clara had finished third in last year’s race. She, however, managed to win the competition on her second try.

She said: “I’m glad that even after a major examination [the GCE ‘A’ Levels], I am still able to do well in a major competition. I did not expect to come in first. I was actually quite afraid of the newcomers and Caucasian athletes. I did not want to underestimate them so I just tried to do what I could.”

Clara had commenced training right after her second last GCE ‘A’ Levels exam in November 2011. This time around, she spent more time on running rather than swimming. In particular, she focused more on long distance running to help boost her performance. In Clara’s previous races, she would perform well in the swim but see her competitors catch up in the run.

She said: “I was actually quite anxious that someone would catch up. I kept thinking that I was the enemy so I just continued running at my own pace.”

This year, competitors had to face slightly tougher conditions in the swim segment as they were swimming against the current on the return. On top of that, there was a route change from last year as runners headed east towards the National Service Resort & Country Club rather than west as a result of the OCBC Cycle Singapore event taking place in the area.

Clara was not perturbed by the route change. She said: “The waters were calmer than I expected. I had this strategy: if (the waves) were going against me, I will try to swim towards it so that I won’t be swept off course.

“I really thought that we would be competing on the old route but I found out about the change online. So I spent the past three days recceing the new route. As it is only one lap, it was slightly different because (on the old route with two laps), I could see where my competitors were. (But this year on the run route), I was actually pacing some elderly cyclists for one part of my run. It was actually quite fun.”

In the Masters category, Richard Parkinson won the men’s title. 45-year-old Dai Matsui, first runner-up of the Men’s Master race, said: “This is my first time participating in the Singapore Biathlon. I am a professional triathlete and decided to join the race this year as part of my training. The biggest obstacle for me was the long distance running, but I’m glad I managed to overcome it.”

More than 2,200 participants competed in the 12th edition of the Singapore Biathlon held at East Coast Park this morning.

Some 73 fathers also participated in the inaugural Dads For Life Father and Child Relay to bond with their children aged seven to 15 years old. This unique non-competitive category featured a 200m swim by the fathers followed by an 800m run to the finish line together.

For 15 of these fathers who also competed in the Open and Masters categories in the morning, the event was an ideal opportunity to share their passion for the sport with their family and kids as many arrived early to cheer them on before the relay.

Mr Lawrence Wong, Minister of State for Defence and President of SAFRA, graced the event as the Guest-of-Honour and flagged off the Men’s Open category at 8.15am.

Mr Wong said: “The Singapore Biathlon has grown to be an established event in the sports calendar. Through such races, our NSmen get to compete alongside top athletes and be motivated to continue engaging in active lifestyles to keep themselves physically fit throughout their National Service. It also provides them with opportunities to bond and to foster stronger camaraderie with their NS mates when they train and compete together.”

The Singapore Biathlon 2012 is jointly organised by SAFRA and the Republic of Singapore Navy (RSN). The event comprises four competitive categories — Men’s Open, Women’s Open, Men’s Masters and Women’s Masters, each featuring a 1.5km swim followed by a 10km run. The Dads For Life Father and Child Relay was introduced this year as part of SAFRA’s partnership with the Dads For Life movement to promote active fatherhood among NSmen. 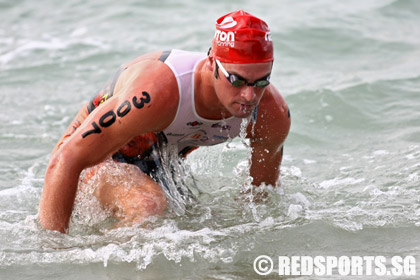