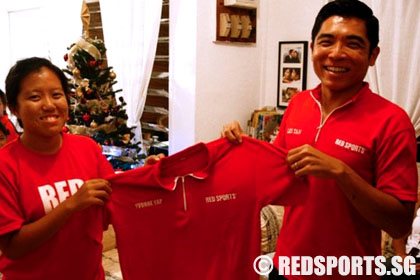 Yvonne Yap was the outstanding graduate of the third batch of interns. She was chosen to cover a wide range of events including the ASEAN Basketball League and the Asian Youth Games. (Photo 1 © Lai Jun Wei/Red Sports)

After six months of going all around Singapore to cover a wide variety of sports, seven interns of the Red Sports' REDaction programme graduated in September 2009.

Farah Alsagoff, Desiree Tay, Gerald Goh, Chin Chi Hua and Yvonne Yap were the third batch of interns to graduate. This programme, which first started back in June 2008, gives youths a chance to contribute to the telling of the Singapore sports story as they pick up on-the-job experience throughout the 6-month journey.

Since the induction of the first batch in June 2008, the programme has seen 18 interns graduate, with most of them still contributing to the site regularly.

Yvonne Yap was one of the outstanding graduates from the third batch. Throughout her time as an intern, she covered a variety of local, national, regional and even international events including the Asian Youth Games (AYG) and ASEAN Basketball League (ABL).

Now studying physiotherapy in Australia at the University of Queensland on a Ministry of Health scholarship, she first joined Red Sports because of her love for sports and writing.

When asked what was her favourite sport, she said, "Soccer - I played it back in when I was in Hwa Chong and it was the season to remember even though we never made it past the group stages. It’s the tremendous comfort of having a team behind your back to cover your weaknesses and the idea that we are as strong as the weakest man makes us want to put in 200% for the team."

While she had numerous highlights with her time on the crew, but she felt that writing about her crew mates Erwin Wong and Alan Chiang beating celebrities at an ASEAN Basketball League (ABL) half-time show was the biggest highlight of her internship.

"It would be writing about Erwin and Alan – from writers to sportsmen!" shared Yvonne when asked what was the highlight of her internship. "Cheering for them instead of the Slingers was a good experience, and of course, having good food and beer to top it off."

The ABL provided a very different experience for Yvonne as she was frequently tasked with finding court-side stories.

"ABL is a league style competition so that means there is a follow up from the previous game and being able to chart a team’s or home crowd’s development which is a great journey in itself. The whole league meant you could do follow ups, tables and statistics," said Yvonne.

"ABL saw people getting the sack, new players flown in, old injuries resurface, new injuries gained, partly because it was over a span of five months."

"Writing court side stories was quite interesting for me because it was not simply presenting facts and figures," continued Yvonne. "It was rather challenging because I had gotten used to the whole ‘present the facts, quotes, final score, play by play’ style of writing."

Being a perfectionist proved to be a challenge for Yvonne during the course of her internship. She constantly got frustrated when she lacked the necessary information like scores and names to complete her story at certain events.

"During the NUS-Great Eastern Water Polo Challenge and the Institute-Varsity-Polytechnic Floorball Championship, I would get rather frustrated when I didn't have the names and scores of the matches," shared Yvonne. "But I simply found different ways of obtaining the necessary information."

Picking up the skill of photography was another challenge for her. Originally, Yvonne joined the REDaction programme as a writer. However, after seeing how much fun sports photography could be, Yvonne picked up the challenge of taking pictures of the action on the field, with her first attempt during the Singapore Ultimate Open 2009. "Increases my market-value," she said.

Despite these challenges, why did Yvonne stay throughout the six months and continue to contribute with Red Sports even after her graduation?

"I like the crew!" beamed Yvonne. "I like how we are a crew from diverse backgrounds and interest in different sports, joined by a common passion to tell the stories of athletes in Singapore. Each crew member provides the necessary skill set and views and opinions to make the site better."

"It is also ironic that only two of us really do sports (while the rest of us only know how to write or shoot)! The crew does a wide variety of activities together – movies, eating, bananagrams, mafia wars – everything BUT sports!"

She also shared her dream for Red Sports.

"I would love it (Red Sports) to be a household name!" said Yvonne. "And of course, continue to tell the Singapore sports story in the best way possible and the way we know how." 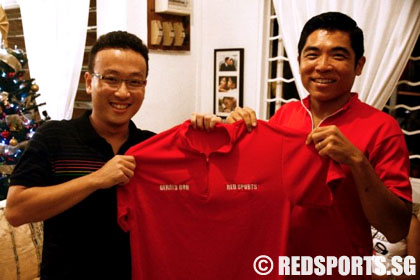 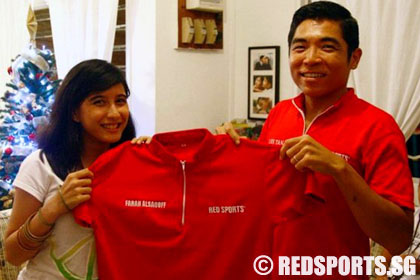 Farah Alsagoff, who now studies in the Singapore Institute of Management, graduated alongside Gerald and Yvonne. She is a floorball player (and a good one at that!) and she felt that asking random strangers for quotes was her biggest challenge. She said, “Initially, it was approaching the players. I was kinda shy (hah!) asking for quotes and such.” (Photo 3 © Lai Jun Wei/Red Sports) 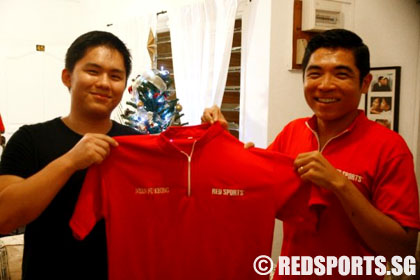 Nyan Fu Keong, who was part of the first batch of interns, celebrated his graduation along with the third batch. (Photo 4 © Lai Jun Wei/Red Sports) 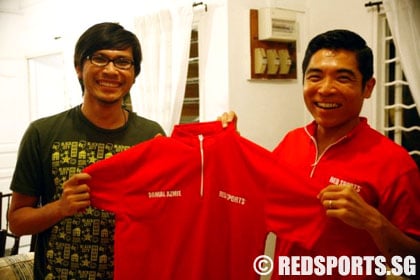 For more information about the internship, go to: REDaction!