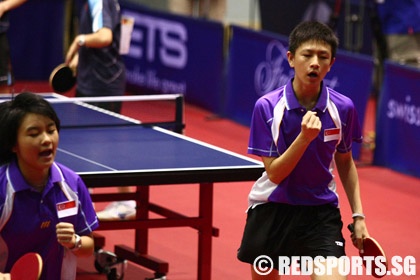 Clarence Chew and Isabelle Li pump their fists in victory as they win a crucial point in the deciding set of the doubles match. (Photo 1 © Lai Jun Wei/Red Sports)

The team of Isabelle Li and Clarence Chew dropped their first match against Hong Kong, but managed to get back up and clinch the tie 2-1. They then cruised past Kuwait in 3 straight games. Having won their 4 group matches, the Singapore paddlers secured first position with Hong Kong coming in second.

In the match against Hong Kong, both Isabelle and Clarence represented Singapore once again in both the singles and mixed doubles. Isabelle got off to a strong start against Ng Ka Yee, winning her games 11-7, 11-6, 11-5. She only twice trailed against Ng, and was egged on by words of advice from her mother. Mrs Li was in the spectators area cheering Isabelle on, and telling her to stay calm and “steady”.

Clarence lost to Chiu Chung Hei of Hong Kong 7-11, 15-13, 7-11, 3-11. The second set saw the match go into a deuce with fast rallies and smashes, keeping the crowd captivated by the high level of play. However, Clarence trailed Chung Hei the entire way in the final 2 sets even though he managed to secure the first few points, ultimately losing to his much higher-ranked opponent. Clarence is ranked No. 148 in the World Under-15 standings, while Chung Hei is highly-perched at No. 12.

“I am satisfied with my performance, I have never beaten him (Chung Hei),” said Clarence, who has played with Chung Hei several times before. Managing to take a set off him was no mean feat for Clarence, who admitted he was nervous before the match.

The mixed doubles match between Singapore and Hong Kong’s Chung Hei and Li Ching Wan went to 5 sets as both teams traded the first 4 11-8, 8-11, 11-8, 7-11. Probably affected by his loss earlier, Clarence gave away quite a number of easy points to his opponents.

The fifth set saw more action from both Singapore and Hong Kong. Isabelle went far back behind the table to receive Hong Kong’s fast shots and landed on the floor twice while trying to prevent the ball from going out of play. The pace of the game got quicker as both sides attempted to catch each other off-guard and chalk up points for themselves. The duo, however, did not disappoint on home soil as they sealed the victory 11-8.

“We performed well, but we made many misses during the match,” reflected Chung Hei after the match. The Hong Kong team had only started training for the Asian Youth Games 2 weeks before this, even though they had been teammates in the Hong Kong Junior Team for more than 2 months already.

In the last group match, Isabelle cruised to 11-3, 11-5, 11-6 victory in under 29 minutes against Kuwait’s Alammar KH F Maha. The latter’s teammate Almkeemy O R Abdulla proved a challenge to Clarence in the first set, and the Singapore player prevailed in a close 11-8 scoreline. Clarence cruised to the second set 11-3, but gave the supporters a scare in the third when he trailed Abdulla 1-5. Clarence then turned the tables on his opponent and sewed up the set, and tie, 11-7.

“I rested a while, my coach tried to help to correct my mistakes (from the previous game),” Clarence said after his win over Abdulla.

Tay Jit Kiat and Chau Hai Qing made their first appearance of the Games as our mixed doubles pair against Kuwait’s Albanai A J Meshari and Alemjaidiel A A S Aisha. The duo started off shakily in the first set and trailed 2-4 before coming back to take the set 11-4. Their chemistry was evident as they quickly wrapped up the final 2 sets 11-2, 11-6.

On who contributed most to Singapore’s marvellous results so far, Coach Xu Xiang Dong said in Mandarin, without hesitiation, “The audience.” 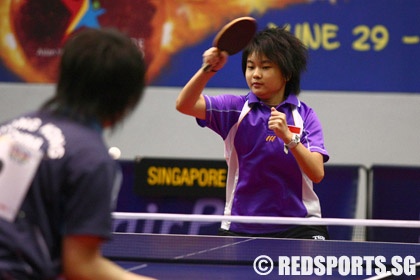 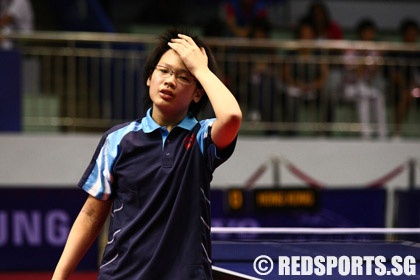 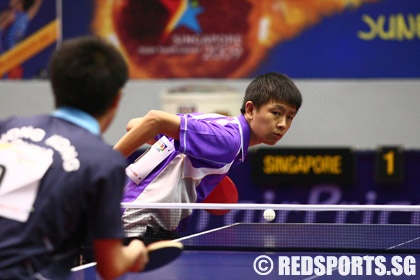 Clarence was not as lucky as he fell to his higher-ranked opponent. (Photo 4 © Lai Jun Wei/Red Sports) 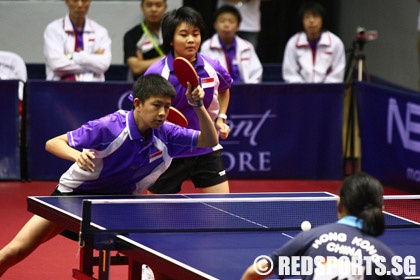 With Clarence and Isabelle teamed up, they managed to overcome the Hong Kong duo in a closely contested 5-set match.(Photo 5 © Lai Jun Wei/Red Sports) 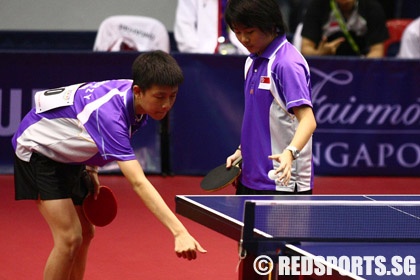 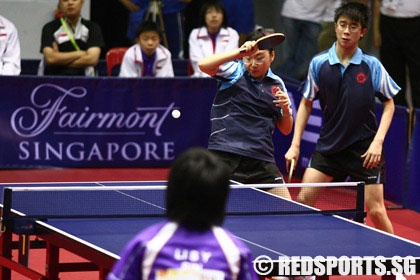 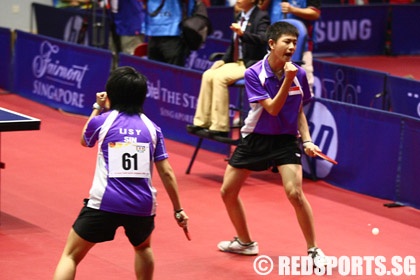 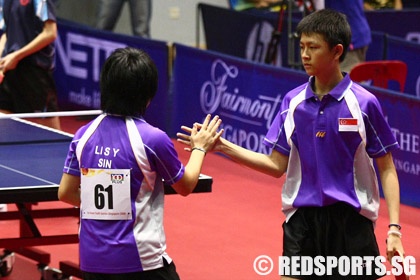 A high-five between the two, with Clarence remaining stoned face as usual, without as much as a smile. (Photo 9 © Lai Jun Wei/Red Sports) 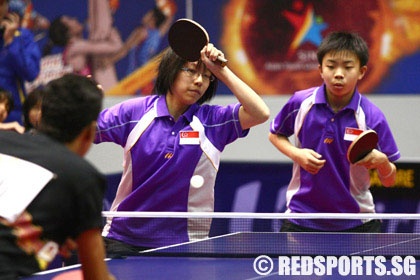 Chau Hai Qing and Tay Jit Kiat made their debut in the tournament and swept aside their Kuwaiti opponents quickly. (Photo 10 © Lai Jun Wei/Red Sports) 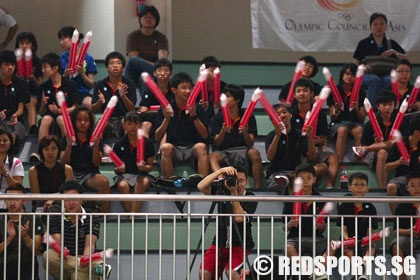 A large group of students from the Singapore Sports School showed up to cheer their fellow schoolmates. Their support was a great morale-booster for the Singapore team as their cheers echoed throughout the competition hall. (Photo 11 © Lai Jun Wei/Red Sports) 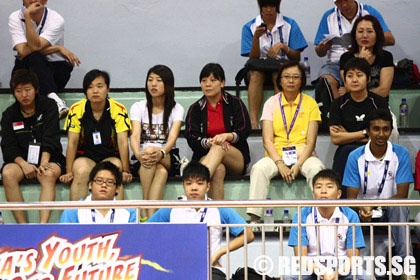