What are the most popular B Division team sports in Singapore? 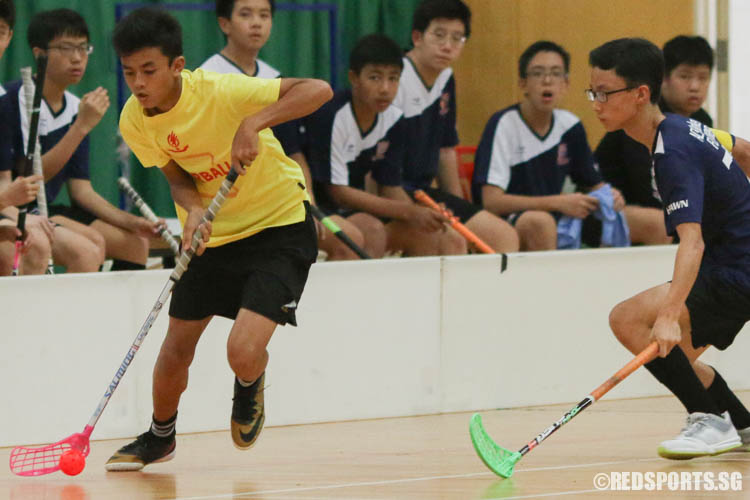 Floorball action from a Northland vs ACS (Barker) B Division floorball game in 2016. There are 34 teams are in action, making it the sixth most popular boys’ team sport. (Photo © REDintern Chua Kai Yun)

With 114 B Division teams in play at the start of the 2016, the sport of basketball has the highest number of boys’ teams in action in the school scene.

This is followed by the sport of football with 94 teams, and badminton with 80.

What may surprise some is the number of boys’ floorball teams. The sport of floorball has exploded in the last 10 years or so. It now has 34^ boys’ teams in action, ranking it the sixth most popular team sport for boys.

In so doing, floorball has eclipsed hockey, its older cousin. There are only 16 boys’ teams playing hockey at B Division level.

The men’s floorball national team recently qualified for the world championships after finishing second to Australia in the qualifiers. Singapore are also the reigning SEA Games floorball champions.

The sport of water polo has only six teams at B Division level, but that has not stopped Singapore from winning 28 straight gold medals at the South-east Asian (SEA) Games.

The number of boys' school teams playing each sport in 2016.

*No zonal competitions. All teams enter directly into a national championship.

All information from sssc.sg, a website run by the Singapore Schools Sports Council.

^The post initially said there were 67 boys’ floorball teams. That is incorrect. There are only 34 boys’ teams. The figure of 67 includes girls’ teams as well. We are sorry for the error.