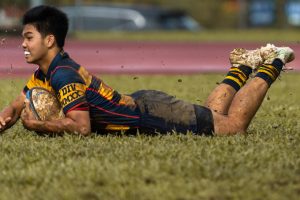 MOE (Evans), Thursday, 21 April 2022 –– Nothing could dampen the mood of the B Division rugby boys competing in the first National School Games final after the Covid-19 pandemic enforced a suspension in the last two years. Not even multiple match postponements, playing their semi-final matches only the day before and a pitch decimated by torrential rain.

“Each batch comes with their own challenges, so for this batch being two years out of action, coming back on the field and playing a final like this was quite trying in these conditions,” said Adrian Chong, head coach of Anglo-Chinese School (Independent). “But I believe they have showed what they are capable of… that’s why they were able to win the Nationals”.

In the end, ACS (Independent) beat ACS (Barker Road) 19-0 on aggregate in the first all-ACS B Division Cup final since 2013. Two tries from scrum half Javier Ling (#14) that Shane O’Hehir (#15) successfully converted helped Independent to a 14-0 win in the first match, while Oscar McEwin’s (#30) try was the only score in the second match that Independent won 5-0.

“It’s been great to finally play in the B Division, and winning it is a blessing that we cannot take for granted,” said ACS(I) captain Ryan Ong (#10). “But I think it is a great way to cap off my secondary school rugby experience.”

The return of NSG rugby was not without some changes due to the prevailing Covid-19 situation. Instead of the usual 15-a-side rugby union matches, this year’s matches were 7-a-side affairs, with each school fielding two teams of 15 registered players each. The first team played a match of 7-minute halves against the first team of the opposing team, while another set of players played against each other in the second match. The winning school team was the one with the higher aggregate points total.

From kick-off, the high stakes of the game could be felt, yet there were a higher-than-average number of handling mistakes owing to the wet and muddy environment.

At the two-minute mark, the unfavourable conditions caused Independent to fumble for control of the ball after a series of knock-backs. However, possession was regained with Independent Prop Evan Tan (#3) diving onto the ball.

Seizing an opportunity, Independent’s Javier Ling (#14), picked up the ball from the base of that ruck and exploited the space on the blindside of the Barker defence. Ling went around the Barker line and made an almost half-pitch-length run. Diving to score, Ling opened the match with its first try.

The try was successfully converted by kicker Shane O’Hehir (#15).

Another opportunity for Independent presented itself in open play, when Isaac Chow (#13) attacked the gap between the last two men on the open side in the Barker defence, creating space on the open wing. Chow then made a pass in contact to Tan on the wing.

Tan powered down the line, gaining 20-odd metres in ground, before being brought down by a cover tackle from Barker’s Joseph Lee (#10). Quick to his teammate’s aid, Chow fended Barker players arriving at the ruck. Chow then picked the ball from the ruck and attacked the centre of Barker defence.

With a flick of the wrist, Chow popped the ball and it connected with Ling, who ran an inside line. Ling was able to, again, exploit the gap in the Barker defence, confidently grounding the ball in goal. Another successful conversion by O’Hehir saw the score rise to 14-0 in favour of Independent.

Possession alternated between Barker and Independent, with both sides launching incisive attacks, whilst remaining steadfast on defence. However, both sides reached a points stalemate on account of the match conditions. The final whistle of the first match blew, with Independent up by 14-0.

With Independent ahead by two converted tries, it was their game to lose. The Barker boys were determined to close the point gap.

Independent were the team to beat, having topped the table and only conceded a single converted try in the entire tournament. The Barker boys were eager to face-off against their brother school again, having lost 31-7, 24-0 in their earlier preliminary group match.

“With the pitch conditions, it was quite difficult [for Barker] to play the free-flowing rugby that they are good at,” said Chong, ACS(I)’s head coach. “Maybe it worked in our advantage that [Barker was] not able to unleash all their quick runners today”.

Even with fresh teams from both sides, the war of attrition would bleed on from the first game, with no points scored in the first five minutes of the seven-minute-long half.

With two minutes to go in the first half, Independent inched closer to the Barker try line in successive phases. However, an unlucky knock-on by Independent awarded a scrum in Barker’s favour, 10 metres from Barker’s try line, much to their relief.

Barker won the contest in that scrum, and the ball was dispatched quickly to Barker Fly-half Jeong Jae Hwa (#32), who kicked the ball behind the Independent line. With the tension on Barker lifted, they now put the pressure on their opposition. Faced with the Barker line chase, Independent gave away a penalty for an unforced error of entering a ruck from the side.

With 30 seconds remaining in the half, the Barker forwards launched an attack on the Independent defence, off a penalty tap at the centre of the pitch. Unfortunately, after a few phases, the ball was knocked-on in contact. The half-time whistle blew with the score stuck at 0-0.

Two minutes into the second half, Independent were 20 metres away from the Barker try line.

Independent’s Jedd Tan (#20) brought the ball to the gain line and, while taking contact, made an offload to Oscar McEwin (#30). McEwin then Samoan sidestepped into the remaining Barker defender on the wing, running the ball into the try area and grounding it. A conversion was taken by Evan Tay (#8), but the ball unfortunately veered to the left of the uprights. The 5 points secured by McEwin would be the only points scored by either side in Match 2.

With 4 minutes remaining on the clock in the NSG cup finals, and the aggregate score standing at 19-0 against them, Barker nonetheless remained undaunted.

Arising from that ruck, the referee awarded a penalty against ACS(I) for failing to release the Barker ball carrier. Building on the momentum, Barker made another line break with Brandon Chan (#31) piercing through the defence. Chan gained a good 30 metres of ground, bringing the play into Independent’s 22. From there, Barker launched waves of attacks, but the Independent defence did not falter.

With the last 30 seconds of the season, Barker conceded a penalty, giving possession to Independent. Independent’s Noah Oey (#7) then kicked for touch. What followed was a botched line out for Independent and a scrum for Barker. Last play was called for that scrum. Quick off the scrum, a massive tackle by Independent prop, Lim Feng (#17), caused Barker to knock-on the ball.

“It was very exciting, but bittersweet in the end,” said Caleb Loh (#9), Barker’s captain. “I am glad in my last year in secondary school I was able to play with my friends and be able to represent the school. I have known some of them for 6-7 years, so to be able to end this chapter of my life with them is really special.”