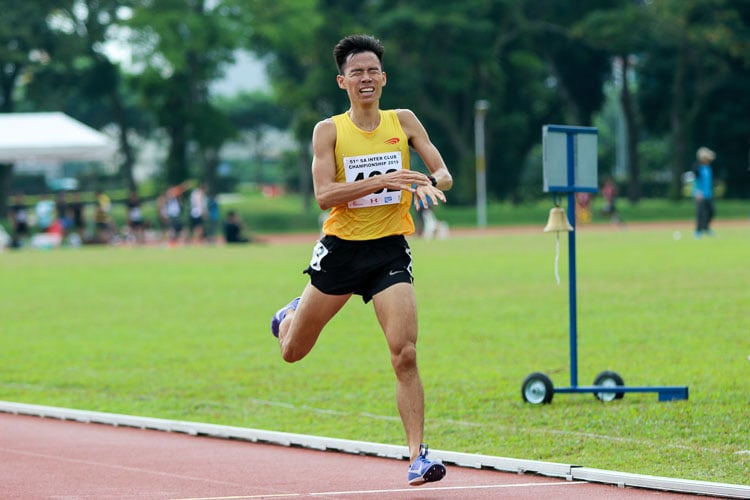 Tan Lui Hua of Wings Athletic Club (WAC) won the Men’s 1500m event with a time of 4:09.15, an improvement on his personal best by 10 seconds. His win helped WAC top the Men’s team standings after Day 1 of competition. (Photo 1 © Clara Lau/Red Sports)

In the field events, NUS and WAC clinched four and six medals out of 24 available. Notably, NUS clinched gold in the Women’s High Jump via Estella Ng with a height of 1.55 metres and both gold and silver in the Women’s Javelin Throw with Chiu Jing Wen and Maya Shanmugaratnam throwing 36.41m and 32.62m respectively.

For WAC, Roxanne Enriquez and Neo Yi Wen completed the podium in the Women’s High Jump while Melissa Yee won the Women’s Shot Put with a throw of 11.55m.

Meanwhile, the distance events — the 1500m and 5000m, for both genders — were split into two timed finals to accommodate the number of participants. The exception was the Women’s 10,000m, which saw only 10 participants registered.

In the Women’s 1500m race, Clarice Lau of ActiveSG Athletics Club won the first timed final with a timing of 5 minutes 15.37 seconds, a hundred metres clear of runner-up Tan Hui Xin of Club Zoom. However, it was Vanessa Lee of NUS and Therese Jansson of Trackstar Athletics (TSA) in the second timed final who claimed the overall top two spots with timings of 4:58.11 and 5:10.32 respectively.

The Men’s 1500m played out similarly, with the first timed final producing the gold and silver medalists and a solo effort from the winner of the second timed final yielding the bronze.

The first final started off at a brisk pace as Ethan Yan of ActiveSG shot to the front with a 29-second first 200m, with only WAC’s Tan Lui Hua on his heels.

Unsure of his fitness, Lui Hua trailed Ethan for much of the race, until Ethan could no longer keep up his brisk starting pace. By the third lap, Ethan had slowed to nearly 70 seconds, significantly slower than his earlier pace of about 64s per lap.

“My race plan was to follow Ethan as much as I could and decelerate as little as possible with each passing lap, and hope to get a personal best. At around the 800m mark, I realised that the pace was slowing down to something more manageable,” explained Lui Hua.

Lui Hua sprinted away to win the race in 4:09.15, a personal best (PB) by 10 seconds. His previous PB was 4:19.44, set at the Singapore Athletics Series 1 in January this year. Ethan finished second in 4:14.18, enough to clinch silver overall as Haja Fayiz of Swift Athletic Association won the second timed final in 4:17.44 to claim third overall.

Similarly, the Men’s 5000m was split into two sections. The first timed final was relatively uneventful with gurkha Subas Gurung of the Police Sports Association (PSA) dominating the field, leading from start to finish for a 16:08.37 win.

Shohib was the first to fall off the pack about two kilometres into the race. With 2km to go, Chong Qi then Karthic fell off as well, leaving Nimesh the sole runner still following Rui Yong.

The timed finals system is designed to accommodate the large number of participants — distance events are typically capped at 16 participants per flag off — without having to hold preliminary rounds, which would be logistically difficult as the Inter-Club meet is held over two days only.

The side effect, however, is that the quality of the field may be diluted as the top contenders are divided into different finals. For those seeking a personal best, it also reduces the opportunity of running in a pack to chase a faster timing.

“Putting those who are faster together will definitely bring up the quality of the field. To facilitate this, runners would have to provide their PB when they register for the race. Looking at the start list, there are not many people who listed their PB or season best, making it difficult to seed them properly,” observed Lui Hua.

In contrast, sprinters, given the shorter distances they cover, are more accustomed to having to run heats to narrow the field down to eight finalists. For both the 100m and 400m events, the heats and finals were held just hours apart.

Notably, only five men finished the Men’s final as NTU’s Calvin Quek withdrew while the Singapore Armed Forces Sports Association (SAFSA)’s Alex Rodney Koh and Ryan Praharsh pulled out of the race a few strides after coming out of the blocks, choosing to forgo the final in order to focus on the 4x100m Relay later in the day.

Their strategy paid off as SAFSA — represented by Adam Oh, Alphonsus Teow, Alex and Ryan — edged out NTU to clinch bronze in the relay with a timing of 44.19s, with Flash claiming silver. WAC emerged champions in both the Men’s and Women’s 4x100m Relays with timings of 43.05s and 51.94s respectively.

NUS has won the Overall title for the last four years since the meet was reinstated in 2015.

More photos from Day 1 on next page