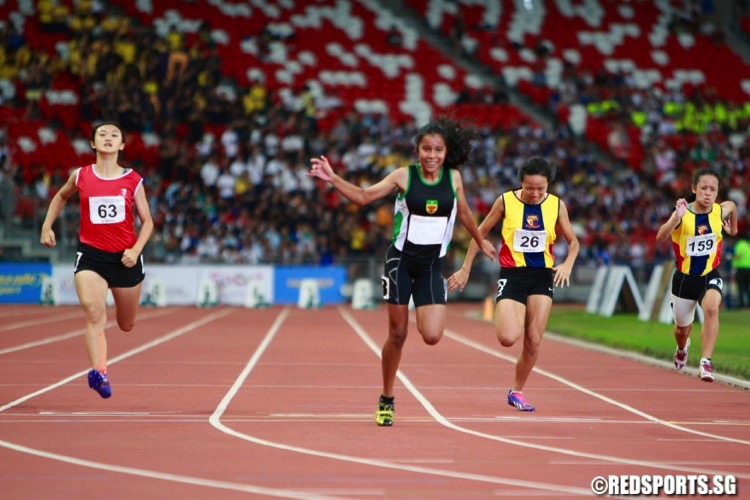 It meant that she successfully completed the sprint double, after winning the 200m final four days earlier in 26.29s.

Sze-Anne is completely new to the sport, and was previously in the choir co-curricular activity (CCA) in her secondary school. She also anchored the NJC 4x100m relay team to a bronze medal.

Meanwhile, this was Amirah’s first time competing in the 100m event in the annual national schools championships. Last year, while representing CHIJ Secondary (Toa Payoh), she had claimed the B Division 200m-400m double gold.

Amirah’s 12.87s timing went under her previous personal best of 12.97s, which was clocked in the heats.

On her victory, the RI Year Five student exclaimed, “I’m very happy since it’s my first time running the 100m and I got a new PB!”

When asked if she was expecting to clinch the sprint double prior to the championships, she continued, “I definitely was not expecting it, but after the heats and semis my expectations rose because of my qualifying position.”

On the same day, Amirah also ran the anchor leg for her RI team in both the 4x100m and 4x400m relays, where they finished in first and second place respectively.

For the 4x100m relay, despite receiving the baton after Hwa Chong Institution’s (HCI) anchor runner, Amirah successfully overhauled her counterpart in the last 50m to win the gold for her team. For the 4x400m relay, Amirah once again received the baton in second, but this time could not make up the huge lead given to HCI’s anchor runner and 400m champion Pan Xin-Min.

Nevertheless, Amirah insisted, “I knew I gave my best for the 4x400m so I don’t have any regrets.”

Paying tribute to her biggest supporters, Amirah ended off, “I would like to thank my late grandfather, Hussein Aljunied – he was a huge supporter of mine and I ran my races for him. Not forgetting my coach Mr Loh Chan Pew for all his guidance, and my mum for her continual support.”