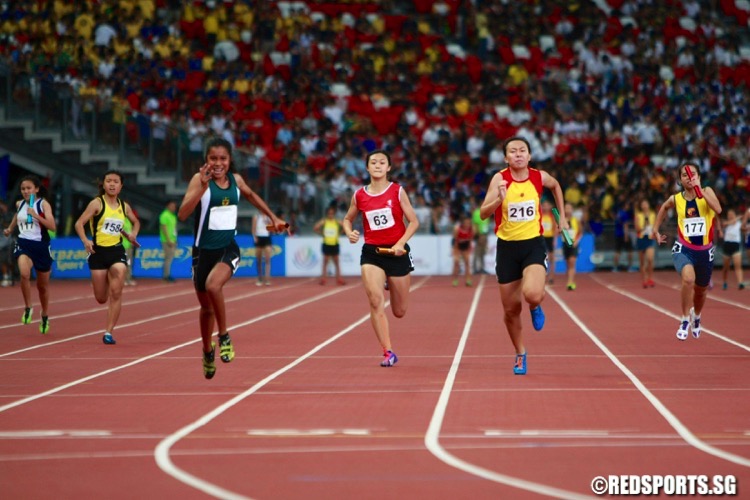 Gwyneth gave RI a decent start on the first leg, before Nicole helped increase the advantage on the back straight, catching a few runners who were on the outer lanes. The baton was changed over to Clenyce on the last bend, before being passed to Amirah with RI in second place, just behind HCI.

Anchor runner Amirah then dropped the competition on the home straight, outsprinting her HCI counterpart to snatch the gold for RI.

NJC’s Teo Sze-Anne, who had finished third in the 100m earlier, also ran a great anchor leg to grab the bronze for her team.

Meanwhile, it was NJC’s first podium finish in this event since 2007, when they also won a bronze.

On her post-race thoughts, sprint double champion and RI anchor runner Amirah exclaimed, “We are really glad! Considering the fact that Hwa Chong passed the baton first at the last leg. Also because the third runner (Clenyce) and I didn’t have much practice because I don’t train with the team.”

First runner Gwyneth added, “We are delighted to have been able to achieve our goals as we felt that we had a strong 4x100m team this year. Baton changeovers weren’t exactly the smoothest, but we’re thankful that it was good enough to win us the gold.”

“Prior to the final, we had insufficient time to practice our passing due to differing schedules and bad weather. Fortunately, with experience from previous races, we were confident that we would have a smooth run, and thankfully we did so!”

Later on the same day, Gwyneth, Clenyce and Amirah combined with teammate Alysee Goh to clinch a silver for RI in the A Division girls’ 4x400m relay, which was won by HCI.

When asked if she was satisfied with the 4x400m silver, Gwyneth said, “Honestly, we had wanted the gold for we would’ve then gotten divisional 2nd – as our points with HCI would’ve been on par but we have more gold medals than them. But I guess it was still somewhat a good run by us; our individual runs during the race were pretty good. HCI has a really strong 4x400m quartet so I feel that they deserved the win.”

On RI’s divisional third placing, Gwyneth commented, “Before the start of the season, we were afraid that we might not even be able to retain 3rd position in the team standings. Our girls’ team is really small compared to the other two schools (HCI and VJC). However, we have exceeded expectations, and for that I think all of us are really happy with our performance!”

“We’d like to thank our coaches, teachers and the school, especially for bringing down the entire Year 4 and Year 6 batches to support. Without their support, we wouldn’t have been able to put up such a good fight,” added the RI track and field team captain.

RI will look to defend their 4x100m relay title next year, as Nicole, Clenyce and Amirah are all Year 5s and have a year left in the A Division.