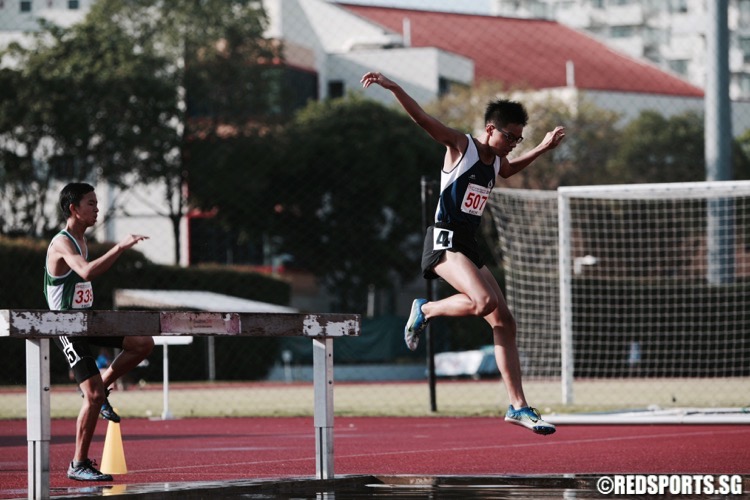 Bishan Stadium, Monday, April 25, 2016 — Fang Yiyang of Commonwealth Secondary School won the B Division Boys 2000m Steeplechase race at the 57th National Schools Track and Field Championships in a time of 6 minutes and 43.20 seconds. In so doing, he earned Commonwealth Secondary their first track and field gold in 15 years.

Dave Tung of St. Joseph’s Institution came in second in 6:48.06 while Ruben S/O Loganathan of Guangyang Secondary was just 0.33s behind in third with a 6:48.39.

The race got off to a slow start, with the first lap five seconds slower than during the heats.

In the second round, Chiew Le Wei (#463, VS) and Ruben took the lead while Yiyang followed closely behind.

Feeling comfortable by the end of the second lap, Yiyang moved into the lead, wanting to pull away from the others. However, Dave managed to stick close to Yiyang and the duo finished the third lap together.

Yiyang, hoping to stick to his plan of dropping everyone by the last lap, pushed hard on the second last lap. However, Dave remained hot on his heels and it was clear that the gold was between the two as the other competitors trailed further behind.

Yiyang allowed Dave to take the lead for the first half of the last round, waiting to make his move. Sensing that Dave could no longer hold the pace, Yiyang sprinted past Dave with 250m to go, not wanting to risk losing a medal to a sprint finish like he did last year.

This time round, he managed to pull away from Dave, pushing hard towards the finish while making sure he would not be caught.

Fatigued, Dave stumbled on the final steeple, sending him crashing to the ground. This gave Ruben the opportunity to catch Dave and the two then engaged in a final sprint for the last 50m, where Dave bagged the silver medal by just 0.33s.

“The weather conditions were worse compared to the heats, which were held at night. My main focus was on winning the gold and not on the timing, although I knew I still had to achieve a certain pace in order to win,” said Yiyang.

“It was a really tough fight and I’m happy to be able to win the race after aiming for it for the last two years.”

“I would say Yiyang pulled off the race tactics very well; I told him to stay close to the leading pack as much as possible so he would be in a good position to make his move. He made his move in the last 300m, which is something we were planning to do,” he said, smiling proudly.

“Yiyang worked very hard for this. He’s very humble, very dedicated, very focused. It made my job a lot easier. But all credits to Yiyang for today’s win.”

Yiyang added, “I would also like to thank my teachers, coaches, parents and training partners. They have been very supportive every step of the way and I’m grateful to make them and my school proud today.”