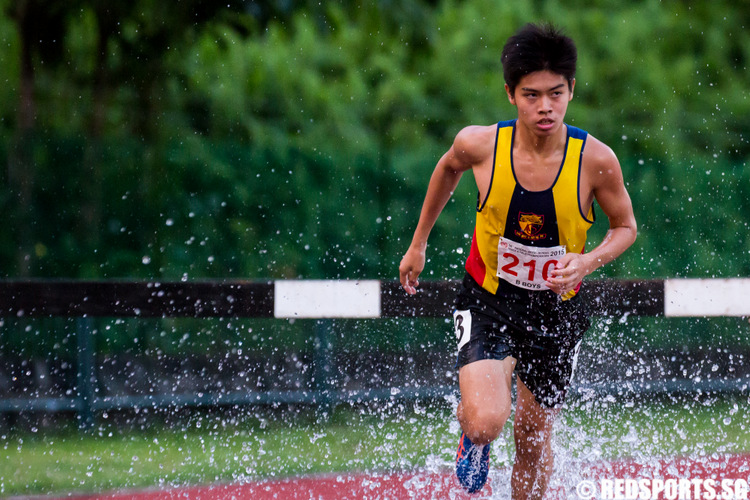 Bukit Gombak Stadium, Monday, April 20, 2015 — After winning the 3000m race last week, Isaac Tan of Anglo-Chinese School (Independent) proved his dominance yet again in the B Division boys’ 2000m steeplechase final at the 56th National Inter-School Track and Field Championships. His timing of 6 minutes and 48.04 seconds gave him a clear win.

Finishing in 6:52.63 and coming in second was 3000m silver medalist, Brandon Quek of Commonwealth Secondary. Victoria School’s Azure Mohan took the bronze with 6:56.34.

The hand-timed meet record stands at 6:11.20, set by Anglo-Chinese School alumnus Nigel Foo in 1993. Narayan Paudel, then of Victoria School, holds the electronically-timed record of 6:25.24 that was established in 1998.

Victory was clear-cut for Isaac as he enjoyed an extending lead throughout the race. On the other hand, Brandon and Azure only took to the last round to respectively claim silver and bronze eventually. While Brandon made his move in the last 300m, Azure’s last burst saw him overtake Commonwealth’s Fang Yiyang at the last steeple despite a slight stumble.

When asked about his performance, Isaac said, “I ran the 3k and I found that this was much tougher in terms of my strength. Although the first few laps were good, I started to die out.”

“Unfortunately, compared to my heats, my jumps were not as good. That ruined my momentum,” Isaac explained, expressing his dissatisfaction.

“I wasn’t expecting this; I was expecting much faster. Although I’m happy, I’m kind of disappointed.”

Isaac’s last event will be the 4x400m relay on Wednesday, the final day of the competition. It will be held at Choa Chu Kang Stadium.