Ed’s note: After reading the speech that Nominated Member of Parliament Dr Ben Tan gave in Parliament, reader Nicholas Foo wrote in to share how sport made a difference in his life. 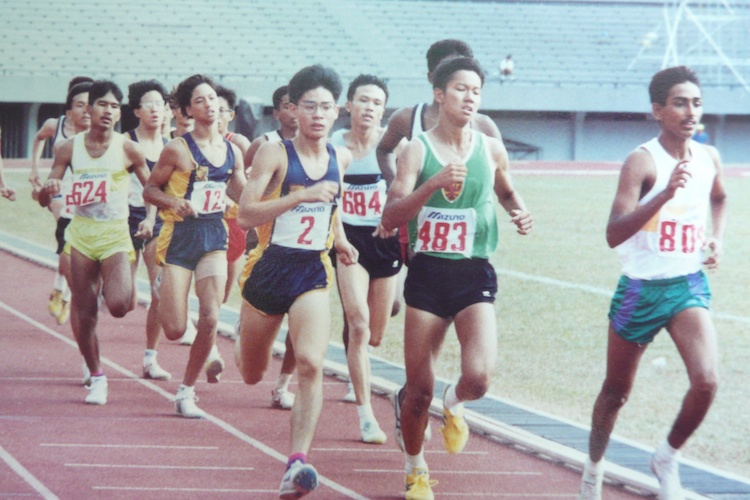 Nicholas Foo (#2) running for ACS in the 1991 B Division 800m final at the old National Stadium. His younger brother, Nigel Foo, was also a runner and still holds a couple of national school records. (Photo courtesy of Nicholas Foo)

I was moved to write this post after reading Dr Ben Tan’s speech on 10 worrying trends in Singapore’s sports culture.

As a boy, I dabbled in all kinds of sports and games. Tennis, table tennis, squash, badminton, football, basketball, swimming, cycling, roller skating…I played them all and I sucked in most of them.

In secondary school, I joined the athletics team and took up running. For some inexplicable reason, I fell in love with running. I persisted with it even though I was a mediocre runner.

Coach could not decide which event I should compete in and he let me dabble in all distances from 200m to cross country before deciding that I was to be a 400m runner.

New Coach joined the school and decided that I would be a middle distance runner. I was then in secondary 3. After training consistently for 2 years, I hit a purple patch and became quite good at the 800m.

When I was in junior college (JC), I hit a rough patch and ran badly for over a year. I persisted with the sport because I loved it. Eventually, I got over the bad patch and managed to recover my form.

Like most people of my generation ( I turn 40 this year), I stopped competitive sports after completing JC. Sometimes I would run; for long periods I would not. However, I always kept myself fairly active even though I did not run. I would go for long walks or bring my kids to swim or cycle.

My old love kept calling me and one day I started running again. I now run 4 days a week. I was fortunate to have been given the opportunity to dabble in all kinds of sports till I found one that I truly loved. Within that sport, I was also given the leeway to try different events till I found my best distance.

A child who is exposed to a variety of sports may or may not become a champion. But he may very well fall in love with one of them and develop a life long love affair of the healthy kind.