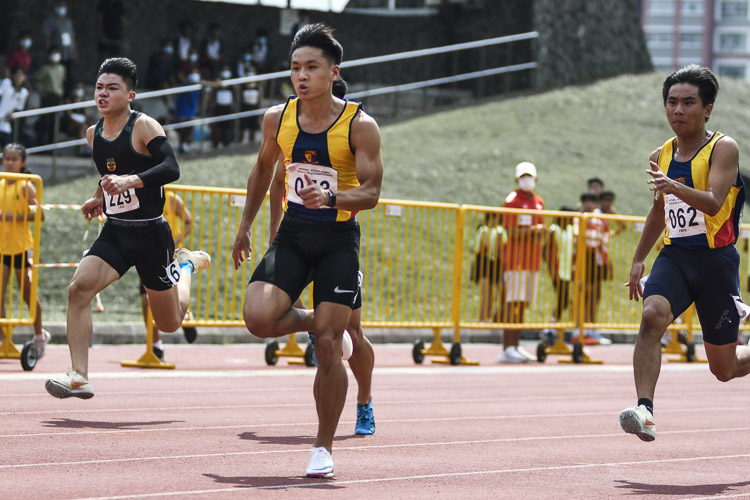 And that turned out to be the exact magical number he found himself staring at after his crowning as the fastest schoolboy to ever grace the National Schools.

“I’m over the moon,” said the final-year Anglo-Chinese School (Independent) student, who also entered the record books earlier in the week in the 200m final.

Mark’s feat is a timely boost ahead of the Hanoi Southeast Asian (SEA) Games in two weeks’ time, where he is headed as part of the national 4x100m relay squad along with Marc, Joshua, Ian Koe, Xander Ho, Sing Hui and Reuben Rainer Lee.

“I’ve done what I could do, I’ve done everything that’s in my control, so now I just wait and see,” said Mark of his hopes of breaking into the main quartet for the Games.

“Honestly whatever happens, I’m just grateful to be able to go to the SEA Games to soak in the experience… because there are a lot more competitions to come.”

The loss in Sec 3

Just a month prior to the National Schools meet, Mark was in Sydney for the Australian Athletics Championships, where he ran — according to him — a “bad race” clocking 10.95s in the 100m qualification heats. It was that race, a first competitive experience at a senior-level overseas meet, that fuelled him for faster times this month, including the 10.72s he clocked into a headwind last week in the semis.

And it is that same grit that had seen him pick himself up after a loss to HCI’s Zeen Chia in the B Division 100m final three years ago.

Said Mark’s coach Hamkah Afik: “After that (2019) race, knowing he was a Sec 3 boy… I tapped on his shoulder and I said, ‘Mark, I think it’s okay, because you are running with someone who is bigger and older than you in Sec 4… so coming in second, you must be very proud of yourself.'”

Mark’s response to his coach then: “Coach, I’m sorry… please don’t put age as a barrier to my performance. I don’t want age to become the reason I failed today.

“Wow… for me, I didn’t expect an answer like that from someone who was only in Sec 3,” said the ACS(I) sprints coach, who has been coaching Mark since he was in Secondary 2.

“That is Mark Lee – he’s driven, he’s coachable, and he executes exactly what you tell him to do. In my many years of coaching… for me, this guy is special.

“He doesn’t get affected by the atmosphere, the surroundings. We just tell him: Mark, today, this is your race plan – the execution, your transition… whatever it is. And he went out there and executed it exactly the way we want it.”

“It takes a whole village to raise a child,” said the former national relay coach from 2006 to 2010.

“It’s not just myself, but it’s the whole village – the ACS family, the team of coaches, his parents… ACS has a whole family culture. So when we move forward, we want everybody to move forward with us.”

Yet, the journey since that race in Secondary 3 was nothing short of bumpy for Mark, whose last gold in the blue riband event came in the C Division.

The Covid-19 pandemic meant he had to miss a year each in the B Division and A Division, and he recalled how demoralising the last two years had been.

“In 2020 it was very hard, but then in 2021 I felt like I lost hope already,” he said. “Obviously I was still training, but it was very hard mentally to keep going, because ‘what’s the point of it?’ – that’s how I felt in that moment.

“But I’m grateful now, in hindsight, that I pushed through.”

Coach Hamkah also explained how himself and coach Tang had taken notice of Mark’s talent in his early years at ACS(I), and planned a comprehensive four- to five-year programme for him, barring the challenges brought about by the pandemic.

He said: “The performance was there (during the two years), we could see it was coming during training… but he couldn’t go out there to prove it, so it was very frustrating for him and for his coaches as well.”

A former national sprinter himself who was an Asian Games finalist and has four SEA Games medals to his collection, coach Hamkah also expressed hope that his charge would go on to surpass him on the international stage.

A different kind of victory

Meanwhile, Mark’s competitors also had their own personal victories to celebrate.

Raffles Institution’s Zachary Tan, who finished fourth in the 100m and claimed bronze in the 200m, suffered tears to his anterior cruciate ligament (ACL) and medial meniscus at the start of last year, and thought his sprinting days were over.

“I was at a loss, I was crying a lot at the start, I thought I wouldn’t have the chance to run again,” he said. “I guess over time, I managed to pick myself up.

“I never expected to go sub-23 for my 200, and for my 100, I never knew I would break the 11.3 barrier,” added Zachary, whose training mate Kieren Lee of Tampines Meridian Junior College took the 100m bronze and the 200m silver.

Mark’s ACS(I) junior Xavier Tan, the 2019 C Division sprint double champion, also ran a huge lifetime best of 10.93s in the 100m final to dip under the 11-second barrier for the first time and clinch the silver medal.

“Honestly, I truly believe he can break the record next year, so I’ll be rooting for him and pushing him in training.”

Mark and Xavier will team up for the 4x100m relay final to be held next Wednesday (May 4) and Mark is confident of their chances of victory in the event.

On the personal front, Mark would not place any threshold to his performances in the near future.

He said: “I just want to push myself as far as I can.

“For me it’s about self-betterment, self-improvement, it’s not about meeting anyone else’s expectations… it’s just my own.”