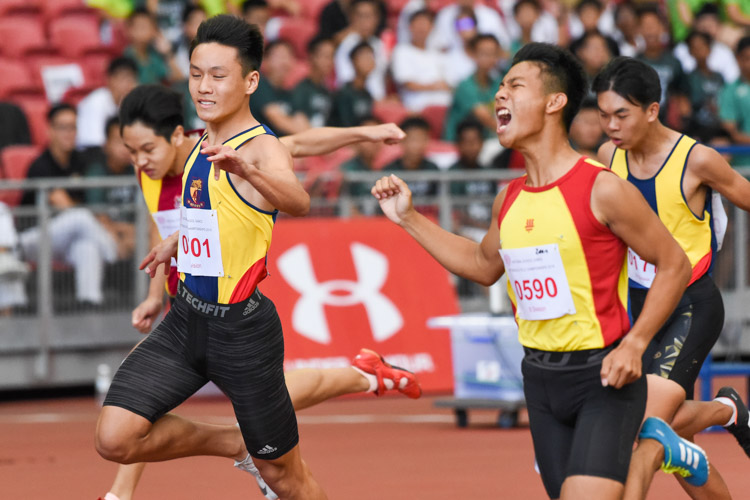 National Stadium, Friday, March 29, 2019 — In his first year competing in the century sprint, Zeen Chia of Hwa Chong Institution (HCI) came out tops in the B Division boys’ 100 metres final to emerge the surprise victor.

The Secondary 4 student — whose pet event is the long jump — was previously also a racewalker during his time in the C Division, and only started doing specific sprints training five months ago.

“In jumps training we do have short sprint time trials and I noticed that my times were pretty okay,” Zeen recalled. “And I thought that since I’m only doing one event, I should just try the 100m to see how things go.”

“It is very surreal that I’m the 100m champion as when I took up the 100m last October, I told myself that I should just aim for a top five finish and that would be okay,” he continued.

Yet, Zeen exceeded even his own expectations as he outsprinted Mark Lee of Anglo-Chinese School (Independent) to the gold, stopping the clock at 11.26 seconds to edge out last year’s C Division champion by seven hundredths of a second.

The timing is a new personal best for Zeen, improving on the 11.44s he clocked in the semi-finals which placed him overall second behind Mark.

“I’m aware that the other competitors are more experienced than me, but I stayed confident and I trusted that God would deliver if I kept the faith and just moved on without doubt,” said Zeen.

“When I crossed the line I remembered seeing Mark from the corner of my eye very near me, so I didn’t dare to claim the win just yet. So seeing my name appear first was relieving.”

Having also won the long jump event earlier in this meet, recording a huge distance of 6.69m — the fourth furthest all-time in the B Division — Zeen’s victory in the blue riband event sees him seal a rare 100m-long jump double.

He became the first boy to do so since way back in 1983, when then-Raffles Junior College athlete Chen Kede won the A Division 100m and long jump golds.

“Being a person that sets very high expectations for myself, I definitely was expecting good results from this year since it’s my last year in B Div,” Zeen said. “But I told myself to just do my best and the medals would just be a bonus.”

“I guess what went right this season was that I used pressure to my advantage to push me instead of bringing me down. I also ensured I put in my best at training to make the best out of every session, and I also spent ample time recovering.”

Later in the afternoon, Zeen anchored HCI to a bronze in the 4x100m relay final, along with teammates Jonathan Heng, Or Yong Hur and Damien Koh.