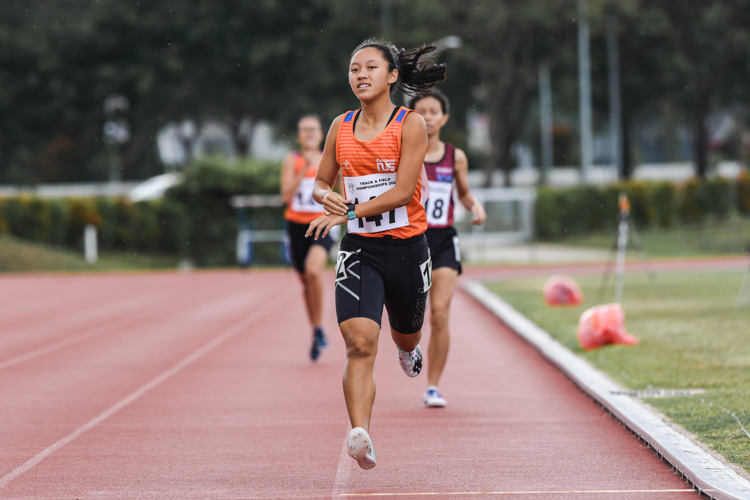 Kallang Practice Track, Saturday, January 18, 2020 — Patience paid off for the National University of Singapore’s (NUS) Levyn Wong and Chew Xiu Zheng in their respective Institute-Varsity-Polytechnic (IVP) 800-metre races, with both employing the strategy of trailing for the first half of the two-lap race and kicking forward in the second half.

In the women’s race, Arissa Rashid of the Singapore University of Technology and Design (SUTD) took the lead for the first lap, setting a pace of 75 seconds which only Levyn kept up with.

“I was supposed to run 72 seconds for the first lap and I was actually on pace for the first 200 metres, but I decided to just follow Arissa first,” explained Levyn, a Year 1 Life Sciences student.

Both ran their personal best (PB) at the 2017 National Schools Track and Field Championships A Division Girls’ race, which Arissa won in 2:23.34 and Levyn placed second in 2:25.52.

At the bell signalling the start of the last lap, Levyn shot to the front, overtaking Arissa and slowly pulling away to victory with a timing of 2:30.99, comfortably ahead of Arissa’s 2:33.30.

Further behind, Levyn’s NUS teammate Joyceleen Yap held her own against the rest of the field to finish third in 2:35.35.

Though far from her PB, Levyn was still satisfied with the results, noting that she had taken a break around her ‘A’ Levels examination period, which took place in November 2018.

“I resumed training only about four months after my ‘A’ Levels, and specifically for the IVP only in August after I entered school,” explained Levyn, who also clinched a silver medal the previous week in the Women’s 1500m race.

In the Men’s race, the larger number of participants — 23 in total — meant that the field had to be run in a timed finals format. The runners were split into two sections, with the results determined by the fastest timings overall, irrespective of section.

This meant that the runners in Section 2 were able to run with the benefit of knowing what timing they had to beat. Indeed, the champion of last year’s IVP Men’s 800m timed finals, NUS’ Tok Yin Pin, also came from the second section.

For Xiu Zheng, the timing he had to beat was 2:03.51, set by Jonathan Andrew of Temasek Polytechnic. It was something his competitor, Hariharan Krishna of Nanyang Polytechnic (NYP) — also known as Hari — was aware of as well.

“Running in the second timed finals did have its advantages,” explained Xiu Zheng, who had finished second to Hariharan earlier this week in the 1500m race.

“Knowing the timing to beat made it easier to focus on the race. However, I think the advantage came in another form for me.

Like Levyn, Xiu Zheng’s winning strategy involved letting his competitor set the pace and running even splits — in Xiu Zheng’s case, 60 to 61 seconds for both laps. Normally, 800m runners would do a ‘positive split’ — running their first lap faster than the second.

“I knew I had to run at least 60 seconds for the first lap to have a chance at the podium, and Hari knew that too,” said Xiu Zheng.

“We broke away from the pack after 200m and he proceeded to take the lead. I stayed behind him to close the first lap in 60 seconds, which was perfect. Hari picked up the pace at the bell and I did my best to follow.

“With about 180 metres to go, I could tell Hari was faltering and I grabbed the opportunity to pass him and went all out till the finish line.”

Unlike Levyn, however, Xiu Zheng was making his 800m debut, having focused on the longer distances in the past — in 2018 he was the IVP silver medalist in the 1500m and 3000m steeplechase and bronze medalist in the 5000m.

“My coach and I discovered that I had the potential for shorter distances after I tried out the 1500m some time ago, so we decided to move down to focus on the 800m and 1500m races. Furthermore, NUS also had strong runners coming in to fill up the 5000m, 10000m and 3000m steeplechase slots this year, so having me move to the shorter distances worked out for the team too,” explained Xiu Zheng.

The change in events paid off as Xiu Zheng’s 800m win finally delivered him his first individual gold in his last IVP Games.

“My running journey has been very fulfilling, with many opportunities to represent NUS in multiple races across various distances. Even though there were injuries and missed opportunities, it’s all part of the journey,” reflected Xiu Zheng on his time in NUS.