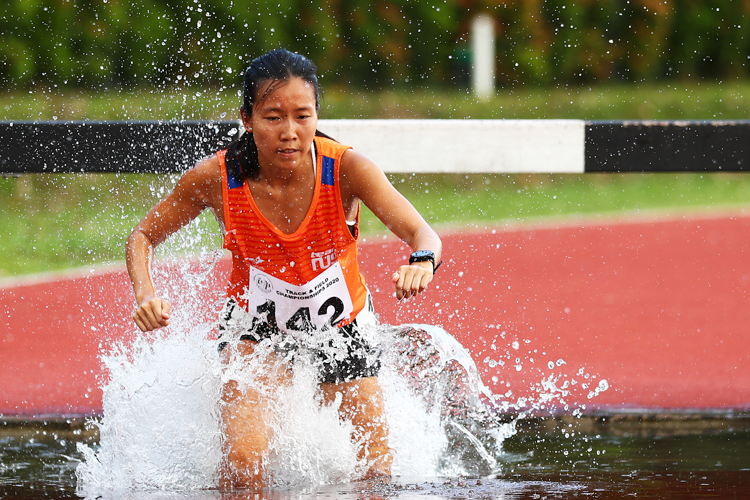 Kallang Practice Track, Saturday, January 18, 2020 — After a three-year hiatus from the Institute-Varsity-Polytechnic (IVP) Games due to his National Service (NS) commitments, Chilton Ong of Nanyang Technological University (NTU) reclaimed his throne in the 3000m steeplechase in his first race as a university student.

Chilton last competed in the IVP in 2017 — then representing Ngee Ann Polytechnic — where he clinched gold with a timing of 9:46.06, also his personal best, making him one of the handful of Singaporeans who have broken the 10-minute barrier in recent years.

With limited time to prepare since the end of his NS, however, Chilton only managed a 10:26.13 this time.

“I took a break after I finished NS and only started training last July, before school started. Then in December I had a dip in training due to a shin injury, probably because I did not do enough strengthening in the pre-season. I actually was not supposed to race this event as I was still feeling some problems with my shin, but I just took this as an entry race,” explained Chilton, currently a Year 1 student at NTU’s Nanyang Business School.

Chilton, alongside Tan Chong Qi of the National University of Singapore (NUS) — who also holds a sub-10 minute personal best of 9:55.20 from last year’s Singapore Athletics Inter-Club Championships — pulled away from the pack right from the start, with the two alternating the lead for the first few laps.

“We wanted to work together actually, each person leading one lap,” explained Chilton.

Chong Qi, however, was still nursing an injury in his IT Band, and could not keep up with the pace after three laps. He soon faded to fourth place, finishing in 11:27.68, a minute behind Chilton.

Though clearly having mixed feelings about his results at first, Chilton ultimately concluded that the race was satisfactory, noting that he had limited time to prepare.

“I think it’s still not bad since it’s my first race after three years,” Chilton reflected. “Actually, just right before the race I was thinking that the last time I did this was in 2017. That’s too long ago!”

Unlike Chilton, however, Hui Xin was running her first ever steeplechase race, in addition to her IVP debut.

“I tried to train for the steeplechase back in Junior College, but I was out after the first few trainings as I injured my knee while practicing the water jump. For IVP, I trialled for the 5000m and 10000m but was only chosen as the reserve. However, there was a slot for the steeplechase so I decided to go for it since I was already training,” explained Hui Xin.

Thus, beating the record came as a surprise for Hui Xin as she was unsure even of what timing she was capable of running.

“Honestly, I didn’t know what to expect. I knew of the Championship Record beforehand but I really didn’t know where I stood in relation to it. So my goal was just to race safely, since it was my first steeplechase race. My plan was to follow the pack first, then speed up after the halfway mark,” she explained.

With no one willing to follow her since the very start of the race, however, Hui Xin ended up running a solo race from beginning to end. Her NUS teammate Kathleen Lin finished second more than 200 metres behind, with a timing of 13:55.55.

“I felt good with my pace so I just decided to focus on my own race. In the end, it went so much better than expected. I was really anxious prior to the race as I didn’t have confidence in clearing all the barriers. My friends who came down to support me were really helpful, constantly reminding me to remain relaxed, and that really helped me focus on the race,” she concluded.