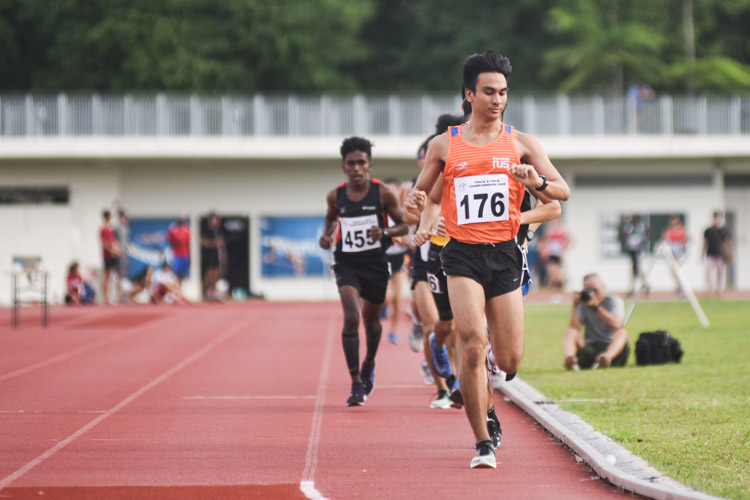 Kallang Practice Track, Saturday, January 11, 2020 — In a last-minute burst over the final lap in the Men’s 5000 metres, Shohib Marican of the National University of Singapore (NUS) returned from the dead to close a 50m gap on race leader Tan Wei Jie of Nanyang Technological University (NTU) to claim his first ever Institute-Varsity-Polytechnic (IVP) gold.

Initially, Shohib took the lead for the first few laps, setting a consistent pace of 80 seconds per lap which only NTU’s Wei Jie and Paxton Hong were able to keep up. After two kilometres, however, Wei Jie snatched the lead, pulling away from Shohib and Paxton.

For the next few laps, Shohib clearly struggled to maintain his pace as Wei Jie pulled further and further away. Paxton, meanwhile, patiently trailed behind Shohib.

“I wanted to be conservative and wait till the end to push the pace, but I ended up struggling early on due to the heat,” explained Shohib, a Year 2 Economics student.

Selvanther S/O Sivakumar of Temasek Polytechnic (TP), who up till then had seemed out of contention for the top three, took the opportunity to close in on Shohib and Paxton. Before he could catch up, however, Shohib surged forward with three laps to go.

Unexpectedly, Paxton abruptly dropped out of the race altogether, while Shohib began closing in on Wei Jie. Selvanther, though failing to overtake Shohib, was also similarly closing the gap on Wei Jie.

With one lap to go, Shohib was still almost 50m behind Wei Jie. But with a 65s final 400m, Shohib not only caught up with barely 100m to go, but managed to put another seven seconds between him and Wei Jie in the final stretch, clinching a decisive victory with a timing of 16 minutes 47.25 seconds. In contrast, Selvanther overtook Wei Jie to clinch silver at literally the last second, overtaking Wei Jie right before the finish line, clocking 16:53.96 to Wei Jie’s 16:54.19.

“I’ve always been okay with my kick, but this time the gap was pretty big. With 300m to go, I realised I was closing in on Wei Jie so this gave me the added motivation to grit my teeth and push on,” said Shohib.

This is Shohib’s first individual IVP gold, having finished third in both the 5000m and 10000m in last year’s edition.

There was less drama in the Women’s 1500m. Shohib’s NUS teammate Vanessa Lee defended her title with the only sub-five minute timing in the field of 4:57.15, while Levyn Wong, also from NUS, finished second in 5:22.67, more than 20 seconds ahead of third-placer Chai En-Yer of NYP.