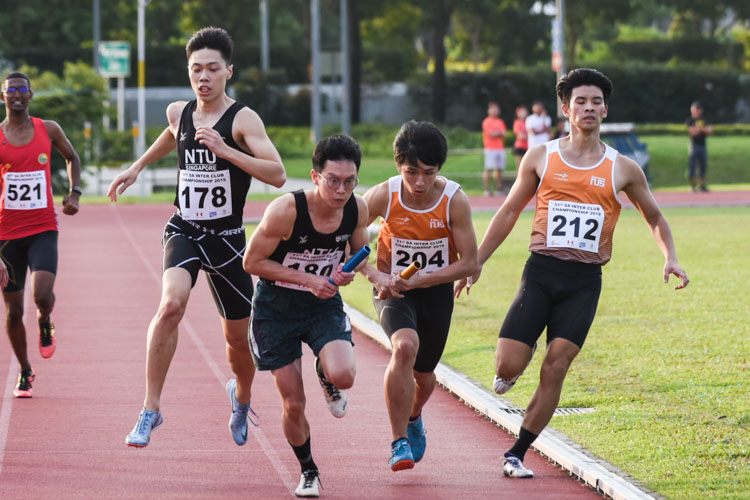 Home of Athletics, Sunday, June 30, 2019 — Since 2016, the National University of Singapore (NUS) had swept the Men’s, Women’s and Overall trophies in the Singapore Athletics Inter-Club Track and Field Championships. This year, despite a well-executed 4x400m relay victory, NUS failed to accumulate enough points to defend their Men’s championship title, conceding the trophy to Wings Athletic Club (WAC) by a mere three points.

The relay events — the 4x100m and 4x400m — weigh heavily on the team standings as the points scored in the race are doubled: the winning club would earn 18 instead of the usual nine points, for instance. With the 4x100m already concluded the previous day, stakes were high for the 4x400m — prior to the race, NUS was down 10 points against WAC.

Earlier in the day, WAC had achieved a series of victories — Tan Chong Qi was the clear victor in the Men’s 3000m steeplechase race, clocking 9:55.20, the only sub-10 minute timing in the field. NUS failed to score any points in the race. In the Men’s Discus, WAC’s Benny Lam edged out NUS’ Brian See by 0.31m to clinch the gold medal.

For the 4x400m, NUS thus planned their relay sequence strategically, settling on a line-up of Sing Hui on the first leg, followed by Russell Kam, Justin Chan and Koh Wei Shien.

“Sing Hui was our first runner as he’s a fast starter, he really has that burst needed for the opening leg. We placed our most experienced runner in the second leg as we knew we had to hold down Darren Tien [of Nanyang Technological University] in the second leg,” said Justin, who is also the NUS Track and Field team captain.

Darren had won the Men’s individual 400m event the previous day with a timing of 51.69s.

Shooting out of the blocks, Sing Hui was hot on the heels of Flash Athletic Club (FAC)’s Ang Weisi, fighting for enough buffer against NTU’s Darren in the second leg. Edging out Flash in the final stretch, Sing Hui was able to hand over to Russell in the lead.

“It was my first 4x400m race so I had a huge adrenaline rush coming into the final two hundred metres and hearing the crowd cheer,” said Sing Hui.

As expected, however, Darren pulled NTU from outside the top three into the lead during the second leg, overtaking Russell mere moments before the handover to their third runner. NUS and NTU were now neck-and-neck entering the second half of the race.

A decisive surge down the backstretch by Justin, however, removed the threat from NTU once and for all.

“Wei Shien asked me to pass him the baton in the lead. I kept what he said in mind during the race,” explained Justin.

“It was so tiring I was looking for the softest grass patch to lie down after my run,” he added half-jokingly.

Receiving the baton with a three-second lead, Wei Shien did more than enough to anchor NUS first across the line with a timing of 3:27.69.

“After I received the baton I was just thinking of how to celebrate for the team,” quipped Wei Shien.

WAC’s triumph turns out to be the first title won by a non-academic institution in this meet since 2004, back when Swift Athletes Association clinched the Overall title. The Inter-Club championship was not contested between 2005 and 2014.

NUS, however, faced no difficulties in the Women’s category, with its 152 points more than double of that of runners-up NTU’s 75 points. This allowed NUS to safely retain its Overall title with 287 points, a feat the school has achieved for the fifth straight year since the Inter-Club meet was reinstated in 2015.

More photos from Day 2 next page