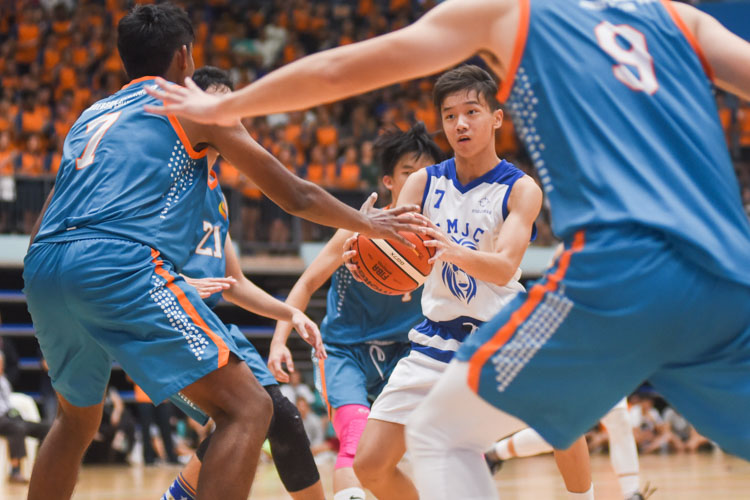 Darryl Chan (TMJC #7) gets surrounded by the ASRJC opposition. He scored a game-high 15 points to lead TMJC to their first A Division basketball title. (Photo 1 © Iman Hashim/Red Sports)

TMJC captain, Tiong Chuan Yao (#10), reflected on his team’s historic win: “Words cannot describe how I feel about today. We trained very hard as a team since last year when we lost in the semi-finals. We told ourselves that we would return here and return to the finals.”

The initial three minutes of the quarter was a back-and-forth affair between both teams. Jovan Wong (TMJC #5) opened the scoring with a putback. Keith Tan (ASRJC #21) then responded with a jumper from the baseline. Gan Qing Yang (TMJC #4) followed up by stroking a three-pointer and Tan Jing Jie (ASRJC #9) responded in kind with a put-back at the rim.

It all went downhill for ASRJC from there, as they hit a wall and started to suffer from a scoring drought. Dorian Chin (TMJC #23) proved to be too strong for ASRJC defenders in the post, as he was able to bully his way into the lane for points. TMJC also showed their intensity on defense as they kept swarming the ASRJC passing lanes and generating turnovers. Atif Hussan (ASRJC #7) was finally able to end the scoring drought by sinking two free throws towards the end of the quarter. By then, TMJC had already built up a 15-point lead.

On his thoughts after the opening quarter, ASRJC captain Tan Jing Jie (#9) said: “I was almost on the verge of crying, but if I were to do that, it would be signalling to the team that I was about to give up. I think me actually tearing helped to spur the team on and we pushed hard on each possession. Any misses would mean that we just needed to go for the rebounds and clamp down on defense.”

The second quarter saw both teams going scoreless for two minutes before Keith Tan (ASRJC #21) put in the first points of the quarter. The teams then matched each other point for point. TMJC did well defensively to get back on defense and shut down ASRJC fast breaks.

On the offensive end, Darryl Chan (TMJC #7) and Dorian Chin (TMJC #23) both scored crucial points to help TMJC maintain their lead. The last four minutes of the quarter saw the momentum shift in ASRJC’s favour as TMJC failed to score at all in the period. Points from Keith Tan (ASRJC #21), Atif Hussain (ASRJC #7) and Louis Ho (ASRJC #4) allowed ASRJC to make up for the early scoring drought and drew level with TMJC.

Dorian (TMJC #23) finally ended the nine-minute drought with a shot from under the basket, but nearly undid all his hard work when he picked up his fourth foul with three minutes left in the quarter and sending him to the bench. Nonetheless, Jovan Wong (TMJC #5) picked up the scoring load in his absence, scoring on an open lay-up and hitting a three-pointer to maintain his team’s comfortable lead. This served to psych up the TMJC crowd, leading to an electric atmosphere in the stands heading into the final quarter.

TMJC looked to have put the game away for good early in the final quarter, when Clement Choo (TMJC #17) and Qing Yang (TMJC #4) both combined for five points to open the quarter. Not going down without a fight, ASRJC pushed hard to get back into the game, with every basket met with raucous cheers from the ASRJC fans.

Spurred on by their fans, Tan Jing Jie (ASRJC #9) and Keith Tan (ASRJC #21) both made major contributions in ASRJC’s 14–3 run in the final quarter, which brought the lead back down to 10. However, Dorian (TMJC #23) again ended that run with a fast break layup, putting TMJC up 12 with 57 seconds remaining.

With the game more or less within their grasp, TMJC brought out their bench, allowing their starters to exit the game with their heads held high and history made. TMJC walked away from the game 62–46 winners in a convincing victory over the defending champions.

ASRJC captain Jing Jie (#9) had this to say about the game: “I feel very happy and sad at the same time. Happy because I did not expect our team to reach this far. Even though we played badly at the start, we managed to compose ourselves and pulled ourselves back to within 10 points. It was all through defense that got us back into the game.

“We wanted to get top four, but after playing well in the semis, that allowed us to get into the finals today and it was a well-earned place. When we got the second round draw, the future seemed vague as we were handed a tough draw. Coming into top four and eventually clinching second was very good for our team.

“I want my juniors to know that they should start growing up and playing like men for next year. As for the supporters, knowing that we are a newly merged school, this event actually showcased our unity as a whole school and showed the support the school had for us and it is a really good starting block for the identity of the new school. It was unfortunate that we could not give the new school a new gift.”

TMJC captain Chuan Yao (#10) added: “We trained very hard, went to the gym and participated in many competitions in preparation for this. We also sacrificed our studies and time with friends in order to win this, but we know that all of the sacrifices were worth it.

“I think it is a good start as we are a merged school and this win will show to our juniors the mentality required and hopefully gives them the motivation to do better than us and try to get another championship. This also sets the tone and the culture of the team and it is good to start off right. We would like to our coaches and teachers, especially Mr Allen Lee as he put in a lot of hard work for us and he treats us like his second family.”