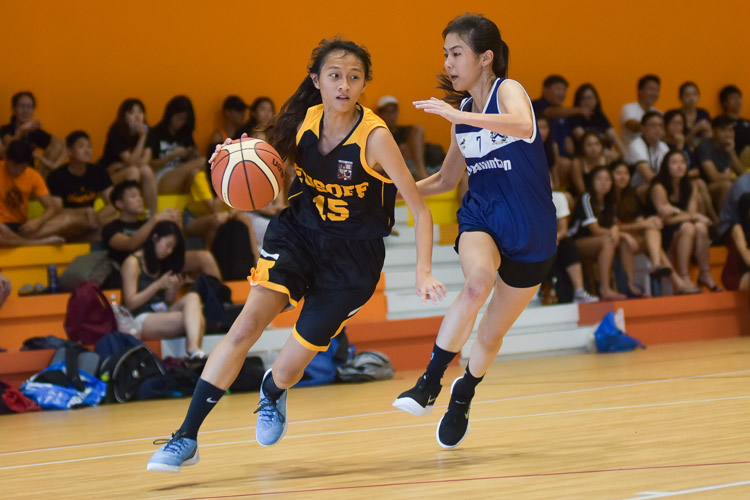 University Sports Centre, Sunday, February 10, 2019 — As the race for the National University of Singapore (NUS) Inter-Hall Games (IHG) title heated up, the Eusoff Hall (EH) women’s basketball team added on to their hall’s point tally with a 42-35 win over Kent Ridge Hall (KR) in a rematch of last year’s final.

Coming into the game as defending champions, the pressure was all on Eusoff — but team captain Valerie Chua (EH #6) made sure her team did not feel any of it.

“We didn’t place any pressure on ourselves,” Valerie said. “We know that each of us has our own abilities, and when we come together as a team, we are not afraid, because we trust our teammates.”

And a team effort it was, as several players contributed to the eventual score-line. Tay Jin Wen (EH #2) and Chok Xin Yan (EH #15) stood out with a team-high nine points each.

Coming into the game, Kent Ridge were major underdogs, but that did not seem to faze them. A hot start saw them blitz the defending champions to the tune of a 13-5 run in the game’s first 10 minutes.

Eusoff had scored the game’s first points on a Valerie (EH #6) floater off the glass, but their offense stalled and grew cold. Xin Ru (KR #7) answered on the next possession with a straightaway pull-up trey, and it looked like that got her going — she scored seven of her team’s 13 points in Kent Ridge’s opening salvo.

The shots she was hitting were not easy either — with the shot clock running down, she sank a ridiculous behind-the-back flip lay-up which sent the Kent Ridge bench and supporters wild, and it looked like the blow-out was on.

However, with a small rotation, Kent Ridge began to slow down in the game’s second frame. Eusoff forced the issue further by implementing a half-court press, hurrying the Kent Ridge offense into bad shots. Slowly but surely, they clawed their way back with a 13-4 quarter of their own.

At the forefront of this attack was Chok Xin Yan (EH #15) — she scored six of Eusoff’s 13 in the quarter, and by half-time, Eusoff had taken the slimmest of leads at 18-17.

Into the second half, and the stagnating Kent Ridge offense was struggling to score. What’s worse, the stifling defense Eusoff showed in the first half had carried over to haunt Kent Ridge.

Over the next 20 minutes, Kent Ridge threw everything they had at Eusoff in an attempt to draw level. Feeding the post, dribble hand-offs, pick-and-rolls, nothing seemed to work.

The first point, especially, looked to be one of emphasis for Kent Ridge in the final quarter, as Freda (KR #12) went off for six of her team’s 10 points in the quarter. She seemed intent on getting her team back into the game, using her athleticism to snag some offensive boards and get her team extra possessions.

However, Eusoff combatted this quickly by doubling Freda whenever she got the ball. Try as they might, Kent Ridge could not get the score to a one-possession game, and with time running out, they had to intentionally foul and stop the clock.

This foul sent Tay Jin Wen (EH #2) to the charity stripe with 8.5 seconds remaining in regulation and a six-point lead. To make it a three-possession game, she only needed one to fall, and she drained it to ice the game.

This 42-35 win for Eusoff meant that not only did they retain their gold, but they would also tack on crucial points in the battle for the overall IHG title.

Their gold added to their male basketball counterparts’ victory as well as the titles clinched by their hallmates in both the men’s and women’s floorball and badminton finals — contributing to Eusoff’s six-gold haul on the penultimate day of IHG which saw them eventually overtake leaders Temasek Hall in the overall standings.

With their IHG season coming to a close, both captains could not express enough how proud they were of their team, with Eusoff captain Valerie (EH #6) saying: “We definitely feel happy, because we are defending champions, and we earned it for some of the seniors who are leaving next year. Some of the freshies also stepped up and I feel extremely proud because everyone played their own part.”

Kent Ridge captain Xin Ru (KR #7) also had this to say about her team: “I think we did really well. Our goal was to reach the finals, because knowing us, we were weak on paper, so I’m very proud of them for coming so far.”