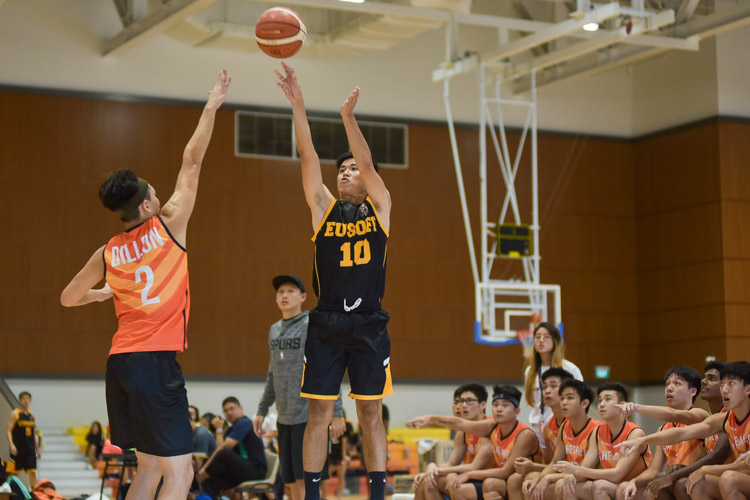 University Sports Centre, Sunday, February 10, 2019 — Eusoff Hall (EH) reclaimed their title from defending champions Sheares Hall (SH) in a tight 45-37 contest in the National University of Singapore (NUS) Inter-Hall Games (IHG) Basketball final. They were champions in the 2016/2017 season before conceding to Sheares last year, making their victory that much sweeter.

“It was a long journey for us this IHG,” said Eusoff’s Raymond Loo (EH #10). “We lost last season to Sheares and this match is like redemption. Other halls put up a good fight, I think we had the better execution.”

The score board was in the single digits in the first quarter as both teams struggled to find their offensive tempo. Although they managed to find space for shots and drives amidst man-to-man defences, their attempts did not find the basket.

It was a 0-0 scoreline until halfway through where Wang Jia Yuan (SH #22) found his way to the rim with a quick drive and a put back by Chiew Kok Seng (SH #24).

With Sheares taking the lead, Eusoff tightened up their defense pushing up for a full court man-to-man defense. Eusoff would eventually score their first points through Lee Lai Sheng (EH #11), who muscled through the Sheares defense to draw contact and convert both free throws.

The quarter ended with a narrow 4-2 Sheares lead.

The second quarter saw both teams picking up rhythm on their offensive game. With a smooth horns set play, Eusoff were able to pick up an easy under-basket shot through Lai Sheng (EH #11) which tied up the game.

This was quickly answered by Zhuang Bao Kun (SH #75) who drove past multiple defenders to the rim, as well as Tan Reng Tian (SH #9) who converted both attempts at the free-throw line off a foul.

By running successive pick-and-rolls, Eusoff were able to find answers to Sheares as Raymond Loo (EH #10) barged his way into the defense and managed to secure the and-one play, giving Eusoff a 9-8 lead, their first lead in the game.

An inbound alley-oop from the base line to Bao Kun (SH #75) allowed Sheares to recover the lead, and both teams would continue the momentum to score and take turns at the lead.

Eusoff pulled ahead in the third quarter coming off Jason Lee (EH #6), where his interception led to a fast-break transition and gave him the and-one play off a drive to the basket. Jason Lee (#EH 6) followed up with another steal transiting to an assist as he lobs the ball neatly for Austin Cooper (EH #21) to score under the basket.

Sheares attempted to close the gap, converting from the free-throw line bringing the score to 20-18, as Reng Tian (SH #9) and Bao Kun (SH #75) were fouled on their way to the rim.

Both teams continued their pick-and-roll plays to pick up the flow and managed to end the third quarter with Eusoff being ahead with a slight 25-23 margin.

Determined to keep the winning edge, Eusoff managed to extend their lead with a three-point shot from Richard Tan (EH #20). Ashley Ng (EH #5) contributed with his drive to the basket as well.

A robust Eusoff defense managed to keep Sheares at bay, whilst stellar performance from Raymond Loo (EH #10) with his numerous steals on defense and penetrations on offense put Eusoff on a 11-0 run. This performance was coming off an earlier ankle sprain Raymond (EH #10) experienced in the early minutes of the game.

Eusoff’s 11-0 run would end as Reng Tian (SH #9) found his way to the basket, which was followed by Kok Seng (SH #24) converting one of his two free throws. However, Eusoff did not slow down as Austin Cooper (#21) managed to get the offensive putback.

The game would go back and forth as Sheares attempted to mount a comeback after the earlier 11-0 run against them but did not succeed as Eusoff managed to maintain their offensive tempo and eventually celebrate the 45-37 victory.

“It was a team game and the team was playing well, they gave me good screens and open looks for me to score”, said Raymond (EH #10), when commended on his fourth quarter performance despite coming back from an ankle sprain.

On the loss, Sheares captain Danny Han (SH #7) remarked: “It was a good game that was even. I guess we made more mistakes. Eusoff are deserving champions, but we will look to win back the championship the next season.”