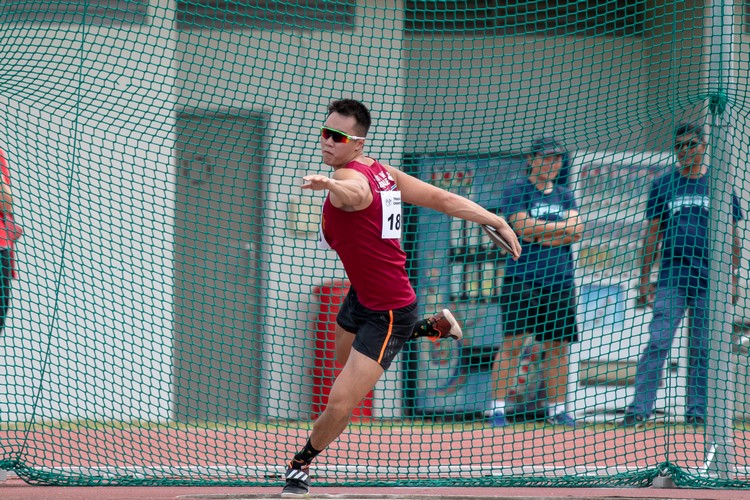 Brian See of NUS winds up to throw the discus. (Photo 1 © Jared Khoo/REDintern)

The 23-year-old, however, missed out on the qualifying mark for the 2019 SEA Games.

“So it was a bit of a pity, the last throw I think was quite far but then I fouled it… because we train here very often so we will roughly know how far it is, (the last throw) was about 45, 46 metres-ish,” added Brian.

In second position, Tan Ting Jun, 22, of NUS threw a distance of 40.11m and was clearly delighted with his final throw as he jumped around in celebration, high-fiving his fellow competitors.

Alvin Sia, 25, of Singapore Institute of Management rounded off the podium with a final distance of 33.89m.

Despite missing out on qualifying, Brian still sounded confident on his SEA Games chances saying that he will have another chance at the 2019 Singapore Athletics (SA) Track and Field Series 1 competition on January 19. On that same day in the afternoon, he will also be looking to break his IVP record for shot put.

“I’m trying to break the record as far as I can, and try to hold it as long as I can,” said Brian.

With him being on the verge of qualification for discus, Brian said he also has his eye on shot put for the SEA Games.

“For the shot put, I think I am aiming for the 2021 SEA Games — most probably a medal there wouldn’t be a problem.”