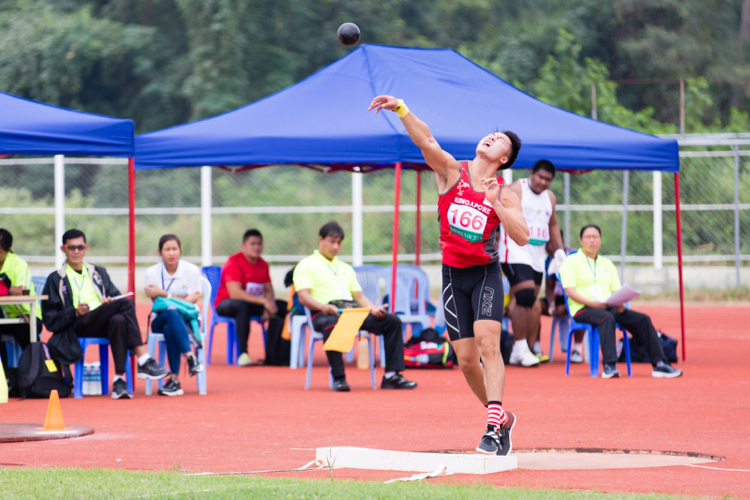 It is the best tally for a Singapore AUG athletics team since the 2010 edition in Thailand, where our athletes clinched one gold, two silvers and nine bronzes.

This time round, the Republic’s reigning sprint queen Shanti Pereira led the way with two golds – a 24.12 seconds triumph in the 200 metres was followed by victory in the century sprint in 11.74s.

The 100m result meant the second-year Singapore Management University undergraduate has qualified for next year’s Southeast Asian (SEA) Games in the Philippines, and was just a hundredth of a second shy of the 11.73s national record she had clocked twice in the last two years.

For AUG team captain Jeevaneesh, it has been a trying year juggling between work and running.

“I was juggling well between work and training at the start,” said the mechanical engineering fresh graduate from the National University of Singapore (NUS). “However, I felt easily tired towards the last few weeks before the competition and unfortunately, fell ill one week before my races with cough and fever.

“I would say juggling between work and training seems harder (than school and training). There are added responsibilities and I have to be financially independent. Also, there are no more school holidays to rest and recharge so I have to learn to better manage both work and training.”

Jeevaneesh is into the last few days of his six-month work stint at the National Youth Sports Institute (NYSI).

“Still, working part time at NYSI gave me the flexibility to train for this competition, as well as to go overseas for training and racing,” he added.

Incidentally, this was the first time NYSI has provided support for athletes competing at the biennial Games. For athletes who met the qualifying mark, NYSI covered 50 percent of the cost of sending them to the AUG, while their coaches were also given an allowance to defray cost of training.

Besides monetary support, NYSI provided nutrition and strength and conditioning support for thrower Brian See, who went on to achieve personal bests in the shot put (14.72m) and discus (44.61m), finishing second and fourth respectively.

Said Brian of his performances in Myanmar: “Going into the competition, I knew I had a chance of medalling. However, I didn’t expect myself to PB by almost half a meter in shot put as I’ve been focusing more on discus.

“On the other hand, I expected more for discus, but I was still contented as I had to compete in two events in less than 24 hours.”

Leading up to the Games, Brian managed to gain mass with the help of an NYSI Sport Dietitian, as well as increased the quality of his training using the PUSH Band with support from an NYSI Strength and Conditioning Specialist.

“The nutrition support I received from NYSI was really helpful – before, during and after competition,” added the second-year NUS civil engineering undergraduate.

“For example, I learnt that having sips of isotonic drinks during competition is really helpful to ensure that the brain remains active, and also had advice on the certain kinds of food I should consume before and after competition to help with preparation and recovery.”

Looking ahead, Brian seeks to qualify for next year’s SEA Games, with his discus mark just 19 centimetres away from the qualifying standard and 2017 bronze medal distance of 44.80m.

While some athletes returned from Myanmar empty-handed, triple jumper Chan Zhe Ying was more than contented with his maiden experience competing at an international meet.

“It has always been my dream and goal to compete for Singapore ever since I won A Division in 2014,” said the second-year economics major at NUS. “That win was probably the turning point in my track career that taught me to believe in myself and aim high to achieve big dreams.”

The former Catholic Junior College athlete posted 14.08m at the AUG to finish sixth, while NUS teammate Joseph Zhao leapt to fourth place with 14.22m. Zhe Ying’s result fell short of his wind-aided personal best of 14.45m, set when he won gold at the Singapore Athletics Inter-Club Championships in October.

“Realistically speaking it was kind of expected because I couldn’t train consistently during the exam period from November to December,” he said. “But I’m quite glad that I was able to maintain my jumps above 14 metres because I hadn’t broken the 14m mark till October this year.

“It was still a good experience, being able to represent the nation. There is no greater honour than competing for your country.”