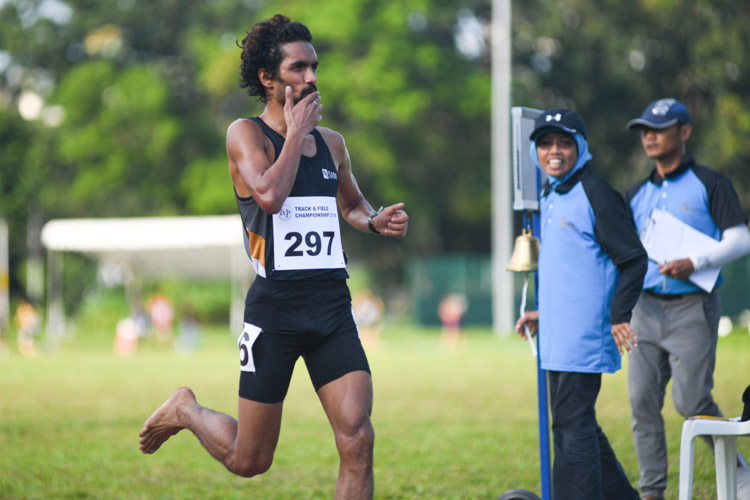 Nabin Parajuli blowing a kiss as he crossed the finish line first in the 5000m race. (Photo 1 © Stefanus Ian/Red Sports)

Kallang Practice Track, Saturday, January 12, 2019 — Singapore Institute of Management (SIM)’s Nabin Parajuli came into the Institute-Varsity-Polytechnic (IVP) men’s 5000-metres race with a simple plan: “to enjoy the run”. And he did, clinching gold with a time of 16 minutes and 1.26 seconds.

But his race plan was nearly thwarted by the hot weather and a strong challenge from Karthic Harish Ragupathy of the Singapore University of Technology and Design (SUTD).

From the start, Karthic showed that he meant business, covering the first 200 metres in 36 seconds. Nabin, running barefoot, was close behind, followed by Shohib Marican of the National University of Singapore (NUS) to complete the trio of runners who broke away early from the rest of the pack.

Within the first 600m, Karthic, Nabin and Shohib had built up a 20-metre gap from the rest of the pack, led by Joshua Evans of NUS.

Covering the first kilometre in about 3 minutes 10 seconds, Karthic began to establish a marginal lead of one to two seconds on Nabin. In the subsequent few laps, Karthic would continue building up his lead and at one point even being 10 to 20 metres ahead of Nabin.

Shohib, meanwhile, had slowed to 3:18 for his first kilometre, with the pack another four seconds behind.

“It was crazy! Especially the first few laps. My mouth was all dry,” Nabin described the heat, though he admitted that it was all part of the racing experience and something he could handle.

Shohib, meanwhile, was caught by the chasing pack which by now was only down to Joshua Evans and Ahmad Arif Ibrahim of the Nanyang Technological University (NTU). The pack of three would stick together until the final few hundred metres of the race.

Further ahead, it appeared as if Karthic, displaying a smooth and relaxed running form, was well in control of his lead. However, as the sun began to set with five laps to go, Nabin accelerated and turned a four-second gap into a four-second lead in the span of one 400m lap.

“I knew myself. My idea was just to run my own race,” Nabin explained.

His strategy certainly paid off as he continued extending his lead right until the end, lapping all participants save for Karthic. He finished with a final timing of 16:01.26, about 10 seconds off his personal best.

Further behind, Shohib’s powerful last lap saw him surge far ahead of his teammate Joshua, finishing in a time of 17:13.68 to take up the last spot on the podium.

This is Shohib’s and Karthic’s first try at the 5000m event at the IVP, while Nabin is a veteran of the event having clinched silver last year behind the now-graduated Jeevaneesh Soundararajah of NUS.

Nabin and Shohib will face each other again on the coming Wednesday, January 16, for the men’s 10,000m. On the same day, Karthic will be attempting the men’s 1500m event.

Nabin and Karthic will race each other again in the men’s 3000m steeplechase – the event in which Nabin is the defending champion and Karthic a two-time champion in during his junior college days at the National Schools Track and Field Championships – next Saturday, January 19.

Once again, when asked about his plans and expectations for the two upcoming races, Nabin, who turns 26 this year, only had one response: