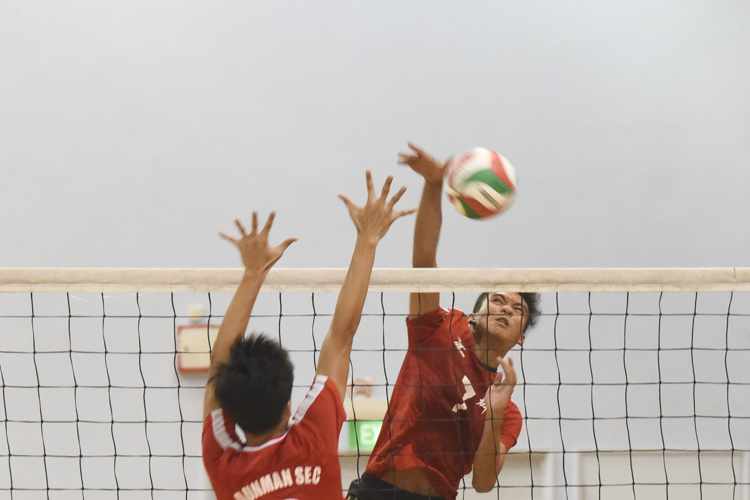 Shuqun’s Zulfadli (#7), who was pleased with his team’s performance, said: “Despite the two losses in a row from Catholic High and St. Hilda’s, we did pretty well against Dunman today and we believed that they did well too. I have much respect for them for playing on par with us.”

As soon as the whistle blew off, Dunman was off to a good start as Zhen Hao (DMN #11) approached with a hard spike to take the lead. However, Shuqun’s Lachlan (#11) was quick to reply.

Both teams were equally seeded and each went back to back with the same technique that their opponents used. It was neck-and-neck as Shuqun led offensively with quick kills while Dunman, with their long limbs, guarded the net tightly.

With Shuqun’s offensive sparks Zulfadli (#7) and Lachlan (#11) leading the gameplay, it wasn’t long before they started to take a comfortable lead over their opponents.

Shuqun specialised in faking their rivals before spiking the ball down for the kill. In that way, it was a clever attempt to restrict Dunman from receiving the spikes and eventually gave Shuqun the first set win at 25-16.

As Shuqun carried on their valiant attempts for baseline spikes, Dunman upped their tempo and fired back with their own set of hard spikes, resulting in long spike rallies. This duel meant that whoever reacts faster would get the kill.

While Dunman resolved to mount a comeback, they wasted chances by failing to save Shuqun’s spikes. This prevented them from converting their attempts into points time and again.

Shuqun’s good teamwork shone brightly as they continued to rack up the points, covering for each other and making sure that whatever efforts they gave, counted.

Dunman, who was not willing to give up, continued looking for a chance to come back. It was all-or-nothing as they hustled hard for loose balls at every opportunity to gain points.

In the final point, as Shuqun went for the spike kill, Dunman managed to get a dig but the ball eventually went out-of-bounds as the final score ended 25-21 to give Shuqun the third place.

“I am very proud of my team… Last year, we did not even manage to get into the top four. So this year, when we managed to do so, it was a great accomplishment,” added Zulfadli (SQS #7).

Dunman’s captain Zhang Zhen Hao (#11) said: “We underperformed today. I am proud of my team. There were ups and downs but we still pulled through until the end. For the rest of the team members, I hope they will work hard.”