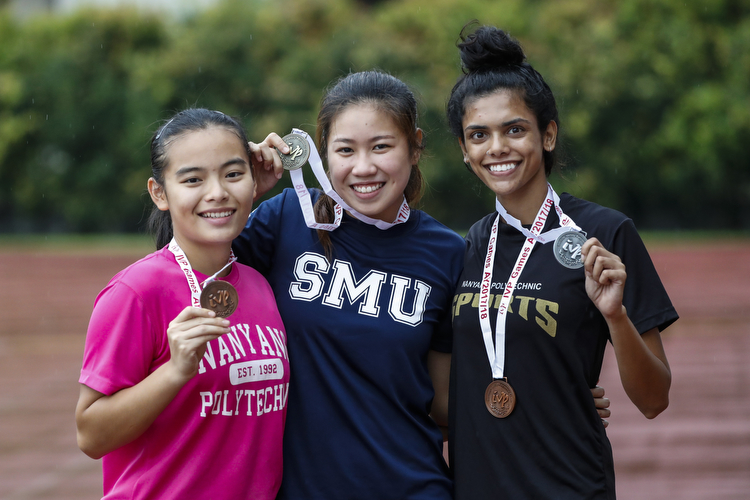 Bishan Stadium, Saturday, January 13, 2018 — National hurdler Kerstin Ong stood tall and finished strong in the opening day of the 2018 Institute-Varsity-Polytechnic (IVP) track and field competition, winning the women’s 100 meter hurdles crown, spurred on by the outpouring of support from her peers.

“This (victory) makes me feel a lot more confident and focus on my execution rather than the results, because I’ve always been very results-driven, and now I can stay objective,” said the 20-year-old, who won in 15.8 seconds (hand-timed).

Ong said: “It’s quite a funny feeling, because last time I’m wearing their shirt, I’m running for another school now.

“Regardless, I’m always really happy to run for my school, no matter who I represent.”

While the persistent rainy weather was not optimal for competition, the first meet of the local athletics calendar carried on successfully.

Daniel Lim of NYP was the men’s javelin throw victor with a throw distance of 53.38m. RP’s Melissa Yee completed the day’s throw events with a 12.48m throw in the women’s shot put. Yee was the only competitor with a throw beyond 10m. Both recorded personal bests.

The sprint events were highlighted by the usual suspects. Local sprint queen Shanti Pereira topped the women’s 100m with 12.01 seconds, while NTU’s Khairyll Amri won the men’s with 11.05s. Shanti, who won a South-east Asian Games bronze medal in this event last August, broke her own championship record by a hundredth of a second.

NUS rounded up the day by sweeping the top spots in the long distance events. Jeevaneesh S/O Soundararajah proved too good for the field and took home the 5000m crown in 15:32.59, while Vanessa Lee dominated the women’s 1500m in a new PB of 5:03.01.