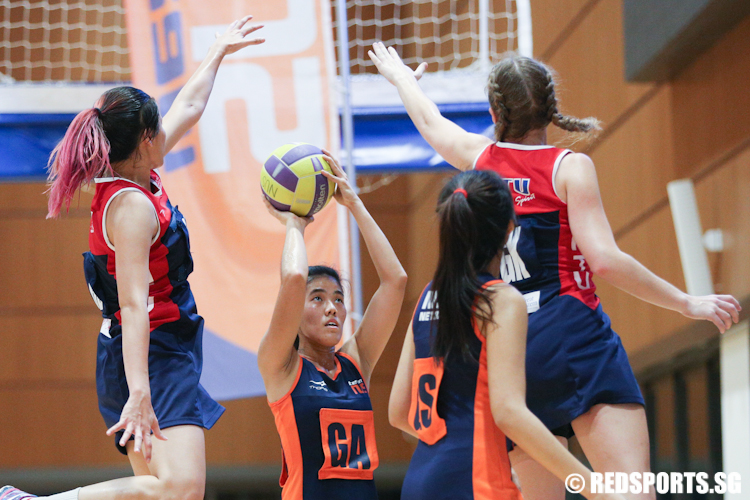 With five players on their roster who helped Singapore beat Malaysia to the Asian Youth Netball Championships title in Korea earlier this year, NUS asserted their dominance early on. They raced to a 10-goal lead by the end of the first quarter and stretched their lead to more than 30 at one point in the fourth.

“I think we definitely did much better than the previous game against NTU,” said NUS team captain and goal-keeper Yvonne Goh, who was among the five who won in Korea. “Everyone worked really hard for the game and played their best. I’m really proud of everyone in my team.”

Both teams have qualified for the Institute-Varsity-Polytechnic (IVP) Games, along with Singapore Institute of Management (SIM) after they defeated Singapore Management University (SMU) 54-38 in a playoff for third-place before before the NUS-NTU final. They will go on to meet three other qualifiers from the Polytechnic-Institute of Technical Education Games at IVP.

The final was played at high intensity, with both teams intent on starting well.

NUS goal-defence Ayshath Zaseela and wing-defence Olivia Wu, who are both national junior players, stood out in physical battles. Unused NUS substitutes Eyu Yan Yan and Claire Seah were also on Singapore’s Asian Youth-winning squad, with several other teammates also on the national under-21 team at one point or another.

Their greater experience told in their superior passing, positioning and footwork.

Early on, NTU found the variety of NUS combination play at pace too much to handle. But they grew into the game, managing to match NUS in the second quarter, with each team scoring 12 goals as NTU managed to cut the deficit to seven at one point.

Standing for three quarters of the match with his arms folded, NTU coach Goh Seck Tuck alternated between berating and urging his team on from the touchline.

“Do not stand still to block her position, you got to keep running!” Coach Seck Tuck was overheard to have said to his players in Mandarin in the third quarter.

NTU also had a very vocal group of about 70 supporters who tried to lift the team. The high intensity of the match took a toll on the NTU girls’ concentration as hosts NUS pulled away after half time. Final score: NUS 66, NTU 36.

“I thought we had a good chance in the 2nd quarter,” said NTU captain Tan Yan Yi. “Perhaps it was the lack of focus that didn’t allow us to pull through the intensity of the game from the third quarter.”