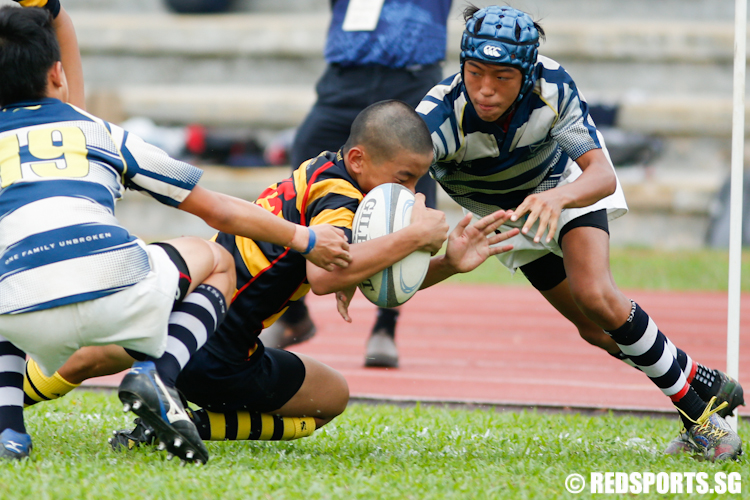 Spotting shaven heads for the final, ACS(I) got off to a fast start, with hooker Gavin Ong cutting through the Saints defence to score a very early try that was converted. The St Andrew’s boys threatened to mount a comeback in the second half with two tries from Joedan Chan, but a penalty and then a fourth ACS(I) try in the closing minutes of the game snuffed out any possible danger.

“It’s a fantastic result. The boys kept their composure and played beyond their maturity today,” said ACS(I) head coach Adrian Chong. “The forwards were awesome today, as were the backs, we need to thank all our coaches for drilling them well.”

The result on Tuesday follows an earlier 20-7 win for ACS(I) over St Andrew’s in the round-robin stage. This victory in the C Division adds to the A Division and B Division titles won earlier in the year in finals contested against Raffles Institution.

“We are just very happy all our hard work paid off,” said ACS(I) captain Emmanuel Yeo, who scored his team’s third try. “There was a time in the second half we had to stay calm and not panic after they scored their tries. The St Andrew’s boys more than made up for their first half performance and we had to be on our guard.”

On Tuesday, ACS(I) fullback Kaylen Chin scored two tries, including his team’s final one that broke the resolve of the St Andrew’s team, with several in tears as time ran out. Blythe Chong, who was earlier yellow carded, received a red for violent play with only seconds left in the match.

“We lost to a better team, they were better drilled,” said St Andrew’s head coach Alan Wee. “We need to be a little more disciplined and fitter in future.”

The Saints went into half time 12-0 down as ACS(I) set out to blitz their opponents. While the ACS(I) boys’ intensity dropped in the later part of the first half, Saints still couldn’t find a way past the ACS(I) defence until early in the second half.

“Our discipline can and needs to be improved,” Lucius said. “We were confident of reversing the loss in the round-robin. We can all do better as a team.”

The C Division rugby final has been contested between ACS(I) and St Andrew’s every year since 2012. The Saints won twice in six years, with the last victory in 2015.